Blossoming from the rugged terrain of the California desert, Whitaker Studio’s Joshua Tree Residence is taking shipping container architecture to the next level. Set to begin construction in 2018, the home is laid out in a starburst of containers, each oriented to maximize views, provide abundant natural light or to create privacy dependent on their location and use. 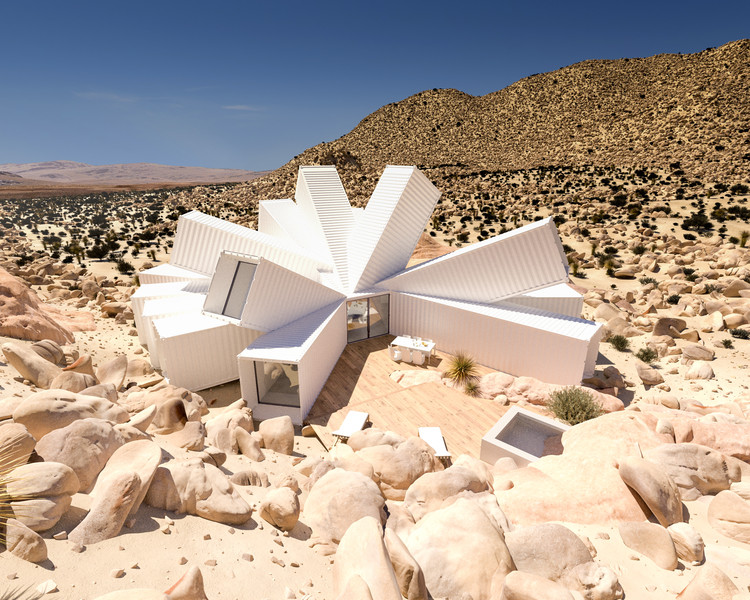 Situated on a 90-acre plot owned a Los Angeles-based film producer, the house is a reconfiguration of an earlier concept by Whitaker Studio for an office building in Germany that was never realized – a project recalled by a friend of the client’s during a recent trip to the site.

“Earlier this year my client in LA had some friends visiting and, having a little time to spare, they all went on a road trip to visit the client's plot of land in Joshua Tree,” explains studio founder James Whitaker. “Whilst there, amongst the arid landscape and jutting rocks, one of the friends said, ‘you know what would look great here?’, before opening her laptop to show everyone a picture she'd seen on the internet.

“The picture was of an office that I'd designed several years ago but had never been built. And so it came to pass that next time the client was in London he got in touch and asked to meet up.”

That concept was then transposed to the desert site, atop a rocky outcropping where a small gully had been created by rushing stormwater. The shipping container “exoskeleton” will be raised on concrete pilotis, allowing water to continue to pass underneath.

Inside, the 2,150-square-foot (200-square-meter) home will contain a kitchen, living room, dining area and three bedrooms, each filled with natural light from the angled container light monitors and furnished with pieces from designer/architect Ron Arad, Whitaker’s former employer. Off the back, two containers extend to meet the natural topography, creating a shielded outdoor area with a wooden deck and hot tub.

Exterior and interior surfaces will be painted a bright white to reflect light from the hot desert sun. A nearby garage will be clad in solar panels, providing all the power needed for the house. To make the house a reality, engineer Albert Taylor from AKT II provided structural consulting during concept development.

Construction on the project begins next year. In the meantime, the original office building design will be exhibited at the National Maritime Museum of Australia beginning October 26. Learn more about the event, here. 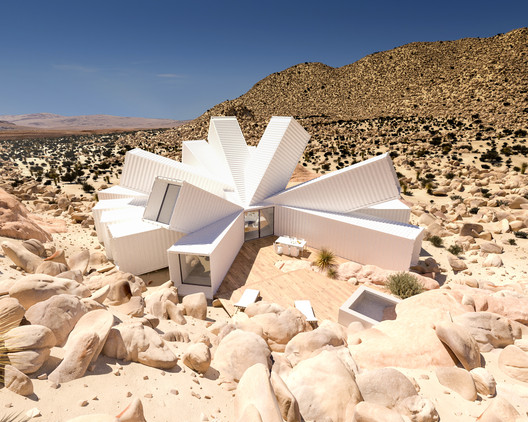