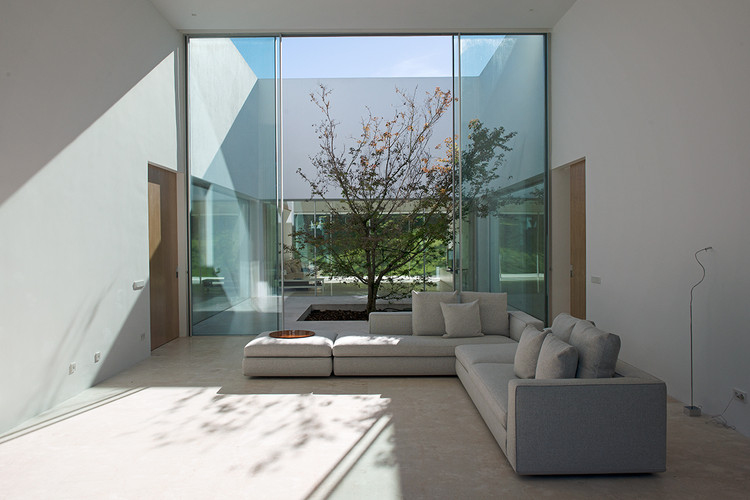 Text description provided by the architects. The key element around which the project is developed is a centenarian oak existing in the plot. The spaces needed for the house are organised around the tree and a courtyard where the axes converge as a latin cross layout.

The common rooms are around the courtyard and the oak, so from any point the presence of the tree is perceived. Its leafy canopy encourages us to establish different heights inside the house. As a result, we obtain a continuous space generated in a single distribution plan, within several volumes that spatially enrich the project which function is to control the interior lighting through the openings in the facades.

The private rooms of the house are away from the common areas, keeping the courtyard as a center and reference of the house

This house is inspired by the mediterranean architecture and the traditional arguments on which it is based.

Through cross ventilation, we achieve that the quality of indoor air is frequently renewed. Through its porches, we protect the windows of the direct incidence of the sun and also generate spaces in direct contact with the surrounding garden.

The volumes, the patio, the existing vegetation included from the beginning in the project and the care in each of the details of all the phases, have made the result satisfactory, both for its owner and for all those who have contributed in its development.