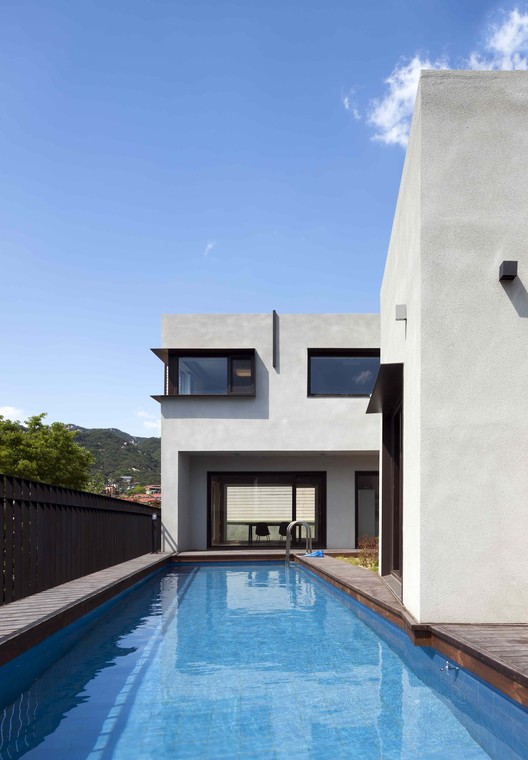 Text description provided by the architects. Lately, we realize regular folks in Korea are becoming more aware of the essential value of house as a family haven, than the economic value as a real estate. Some go out suburb to live close to nature, while some find superb solution in downtown near where they work.

Pyeongchang-dong has two hills facing each other across a street that almost feels like a canyon. While the western side lies on Mt. Bukhansan and has large and luxurious houses, the eastern hills, which are leaning against Mt. Bukaksan and Mt. Inwangsan, have smaller and older houses in every nook and corner.

A young couple came to us to build a house in the neighborhood. They started their newly-married life in a single house in Pyeongchang-dong, and have spent a long time to find a proper site.

The site was on the eastern side of the Pyeong-chang dong. It was in the very inside of the steep region where the design and age of the housings are uneven. It also had a lovely view. The majestic figure of Mt. Bukhansan was partly cut off by the medium-size houses in between. On the site, the remains of the house that had been destroyed and weeds completely covered the ground, making it impossible to see the bare land.

Because of the steep slope and seemingly difficult appearance, nobody wanted to build anything on the site. After looking at the land, we began designing; listening to stories about the houses they wanted to live in.