Save
"We Dream of Instant Cities that Could Sprout like Spring Flowers": The Radical Architecture Collectives of the 60s and 70s
Share
Or
Copy

The first moon landing, widespread anti-war protests, Woodstock and the hippies, rural communes and environmentalism, the Berlin Wall, the women’s liberation movement and so much more—the tumultuous decades of the Sixties and Seventies occupy an unforgettable place in history. With injustices openly questioned and radical ideas that set out to unseat existing conventions and practices in various spheres of life, things weren’t any different in the architectural world.

The grand visions dreamt up by the modernists were soon challenged by utopian experiments from the “anti-architecture” or “radical design” groups of the 1960–70s. Reestablishing architecture as an instrument of political, social, and cultural critique, they drafted bold manifestoes and designs, experimented with collage, music, performance art, furniture, graphic design, zines, installations, events, and exhibitions. While certain individuals from this era like Cedric Price, Hans Hollein, and Yona Friedman remain important to the realm of the radical and the unbuilt, the revolutionary spirit of these decades also saw the birth of various young collectives. For eccentricity at its very best, read on for a (by no means exhaustive) list of some groups who dared to question, poke, expand, rebel against, disrupt and redefine architecture in the 60s and 70s.

Inspired by the counter-culture milieu of the Bay Area, Chip Lord and Doug Michels founded Ant Farm in 1968. While the group’s initial focus was on reforming architectural education, their work soon expanded into a tool for deeper introspection and critique propelled particularly by the Brutalist architecture of Louis Kahn and Paul Rudolph. Through performances, installations, videos, manifestos and agitprop events replete with their own inflatable structures, they celebrated flexibility and lightness; these ideas eventually culminated in the design of The House of the Century.

Subsequent projects, like the famous Cadillac Ranch Show, Media Burn and Dolphin Embassy, also served as a tongue-in-cheek comment on mass consumption, production and the resulting environmental depreciation. As if all this was not enough to satisfy the cheeky spirits of the duo, a customized Chevy called Media Van accompanied them throughout their travels across the United States.

Incorporating elements from science fiction, comics, advertising imagery, pop-art, poetry, and collage in their work, Archigram upheld the tenets of neo-futurism, mass-consumerism and contemporary technology in post-war Britain. They rejected the modernist straitjacket by spewing out fantastical designs of buildings and cities which were mobile, adaptable, and far more technologically advanced than anything that the modernists had built to that point.

Best-known for their No-Stop City and their eclectic, kitschy aesthetics that are best recognized in the design of the Safari Chair and the Dream Bed, this Italian design studio playfully critiqued the status-quo using satire, subversion, irony, and exaggeration.

In a joint manifesto signed for a 1961 exhibition Superarchitettura, by Archizoom and Superstudio, they proclaimed: “Superarchitettura is the architecture of superproduction, superconsumption, superinduction to consume, the supermarket, the superman, super gas.” Using sculptural forms, bright colors and “furniture-jokes” like the Mies Chair, the nonconformist group argued for total liberation from, and the “right to go against a reality that lacks meaning... to act, modify, form, and destroy the surrounding environment.”

Formed in 1973, “Cavart,” meaning “quarry,” was named after the site where the group’s first performance took place: the quarry of the Monte Lonzina near Padua. Often taking over such remote sites on the outskirts of cities, the group mainly operated through seminars, performances, and workshops. The most famous of all was the week-long workshop Culturally Impossible Architecture, which was home to over a hundred participants in 1975, including Will Alsop and Marco Zanini.

Cavart worked tirelessly to do away with bourgeoisie ideals and aesthetics, arguing for a more meaningful relationship between architecture and the environment. Their workshops often resulted in make-shift pop-up towns which were created from scratch in just a few days, with structures made with inexpensive, everyday materials which were easily accessible to all.

Did all radical architecture groups, then, never actually “build buildings”? Not at all! A few did indeed dabble in (re)designing spaces, more specifically, discotheques or “pipers”, as they were locally known in the 60s. The Italian design group UFO decided to take control of this seemingly “neutral space,” the nightclub, as a ready canvas for experimentation. Taking inspiration from a Disney comic book, Donald Duck and the Magic Hourglass, the group created a strange setting replete with hour-glass shaped furniture, large lanterns and a DJ booth on a flying carpet. Makeshift structures and industrial aesthetics marked the experiments with discotheques in this era, all the while commenting on the sordid state of affairs in the world.

In a similar vein, another Italian collective founded in 1967, Gruppo 9999, converted an engine repair workshop into a disco with furnishings made out of washing machine drums and old refrigerator cases, calling it Space Electronic—it became an architecture school by day and a nightclub by night.

Gruppo 9999’s work also brought to the fore their concerns about sustainability and ecology. In the 1971 Mondiale Festival, the second floor of Space Electronic sported a vegetable garden while the ground floor was flooded with water. This garden patch was just a precursor for what was to come—in 1972, Gruppo 9999 won MoMA’s Competition for Young Designers with the proposal for their Vegetable Garden House.

Founded in 1971, Gruppo Strum was Giorgio Cerretti, Pietro Derossi, Carlo Gianmarco, Riccardo Rosso and Maurizio Vogliazzo. The meaning of the name’s group roughly translates to “instrumental architecture”, indicative of the optimistic spirit that the group imbibed. Also experimenting with the discotheque format, they created playful, adaptable spaces with a mix of programs: a space for fashion shows and boutiques, music nights and dance.

Gruppo Strum is best remembered for its grass-green Pratone lounge chair, which, much to the delight of many, is back in production by Gufram, the Italian manufacturer of the original chair.

This Viennese collective operating at the junction between architecture, psychology and technology is best remembered not just for its wild proposals for inflatables and parasitic architecture—like the Oase Nr. 7, a spherical pneumatic structure attached to an existing building during Documenta 5, creating a space for contemplation or play—but also the strange breathing devices and helmets like the Mind Expander series. Seeking to play with human perception, these helmets presented a bizarre new reality for those who wore them, heightening their senses and altering their ideas about space.

The group also employed the sense of taste in their projects: the notorious Food City I and Food City II invited onlookers to quite literally eat their city—an edible scale-model made of parts of Minneapolis, and later Houston, as well as Central Park. 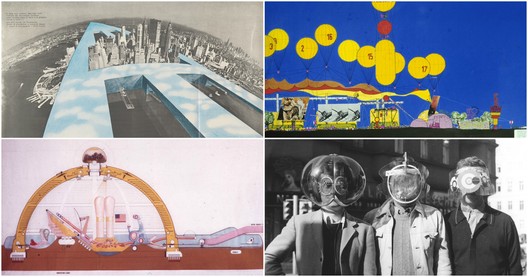