Save
Museum at Prairiefire / Verner Johnson 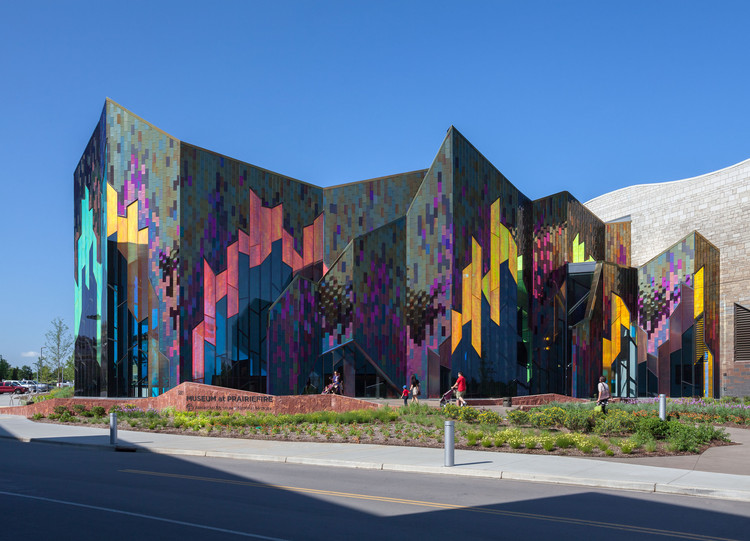 Text description provided by the architects. The architecture of the Museum at Prairiefire in Overland Park, Kansas celebrates the rich story of the region, stemming from the Kansas tradition of controlled prairie burns. Real Estate developer, Merrill Companies, contacted prominent Museum and Architect Planners – Verner Johnson to aid in creating a structure that would match the surrounding landscape. Jonathan Kharfen, the lead architect on the project examined the landscape and its characteristics and developed an idea to create a building that looked like flames ablaze in the fields. The design evoked a sense of irony, according to Jonathan, “It’s not traditionally a building’s job to conjure up images of fire, in fact, it’s quite the opposite”. The obstacle presented here was how to capture the upward and expansive movement of fire, adding animation to a building constructed of lifeless materials. The solution was to use a combination of multi-colored, iridescent stainless steel tiles, mixed with an innovative use of Dichroic Glass. These products, in conjunction with the stone volumes as a backdrop, provided durability and design versatility, resulting in vivid, inextinguishable color.

Dichroic glass came about through a collaboration between the R&D team at Goldray Glass –an architectural decorative glass manufacturer, and 3M. By laminating 3M's premium grade polymeric film between two or more lites of glass, Goldray Glass created a product that exhibits a brilliant color shift through transmitted and reflected light. Available in cool and warm tones, dichroic laminated glass can be integrated into any design concept as an accent or focal piece.

To truly capture the fire element, Light Interference Color stainless steel panels – from Millennium Tiles, were used to complement the dichroic glass. The light and color changing properties of these two materials emulate the unique characteristics of fire. As the light conditions change throughout the day, the colors of the building move and dance the way flames flicker.

The building wings on either side of the lobby are clad in locally quarried limestone cut into thin panels, and features red Utah sandstone at the main stair. Verner Johnson says these wings are clad with contoured parapets evoking the softly curving sculpted hills of the prairie. The stratified stone forms a gradient, from darker “charred” stone at the base, to near white stone at the parapet. The stones colors are mixed in varying band heights to achieve the gradient

The interior invitingly opens through from street to wetlands. Within the Great Hall the fire shapes form interesting volumetric spaces and shifts in scale, creating countless moments for discovery. To evoke the aura of flames, the walls of the ‘lines of fire’ are designed as thin as possible. Narrow tube columns are spaced 25” apart, encouraging people to stand between them. The lack of apparent structure makes the Great Hall seem to float, expand around corners, and dynamically engulf the visitor.

The Museum at Prairiefire is a regional civic hub bringing world-class educational traveling exhibits from the American Museum of Natural History to a community hungry to engage in broader cultural and scientific experiences. 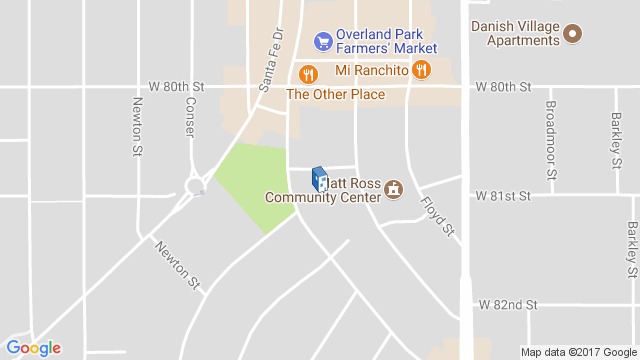 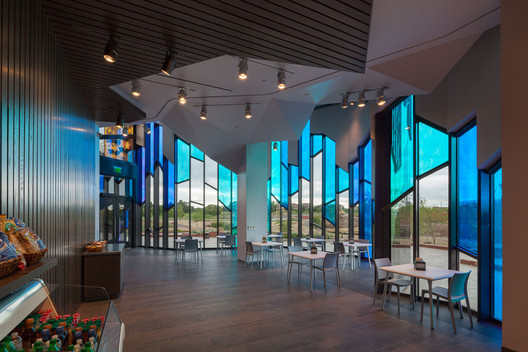 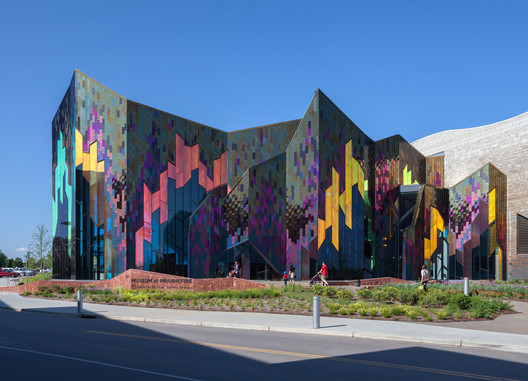