The 4-minute film "Community by Design: Skid Row Housing Trust," directed by Myles Kramer, has been selected by as the winner of the AIA's annual I Look Up Film Challenge. Winning out against 81 other entries, the film investigates the impact and approach of the Skid Row Housing Trust, which creates homes for homeless people in Los Angeles, with the help of renowned architects such as Michael Maltzan Architecture and Brooks + Scarpa Architects.

In addition to the winning film, two runners-up were selected: "Pisces" directed by Brad Deal, which follows architecture students at Louisiana Tech as they build a footbridge at Medcamps, a summer camp for children with special needs; and "A Little Alcove: San Francisco Navigation Center" by Julian Pham, which documents the impact of a transitional housing scheme for the homeless in San Francisco.

All three videos will be screened at the Architecture and Design Film Festivals in Chicago on September 26th and New York on November 1st. In addition, voting is now open through October 6th for the People's Choice Award, which will be screened in New York on November 1st. Watch the three winning videos below, and cast your vote for the People's Choice Award here. 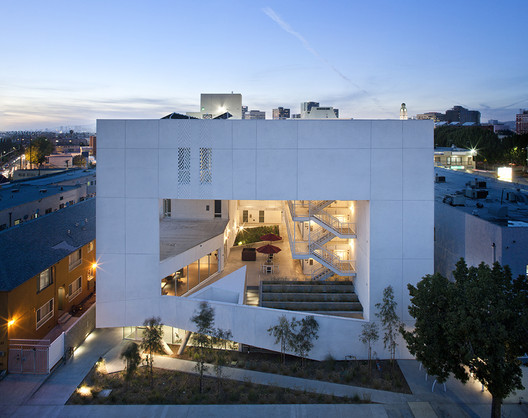