Selected as the winners of a competition for the planning concept in 2016, the team's proposal focused on the logistics and experience of the hundreds of thousands of visitors who will be enjoying the Games.

The plan called for the creation of new permanent and temporary venues at key locations throughout the city, including cycling events on the Champs Elysees and a beach volleyball arena at the foot of the Eiffel Tower, the design of which will strive to meet Paris 2024’s commitment to being the “most sustainable Games ever.”

To ensure all venues meet the strict regulations demanded by the IOC and the city, Populous and Egis collborated with sport and culture consulting agency ISC on the bid proposal.

“We are proud to have played a part in the successful Paris 2024 bid. Bringing people together to enjoy an unforgettable experience is the overriding ambition of Populous in all that we do and is at the heart of the Paris 2024 vision,” said Populous Senior Principal Ben Vickery.

“The city of Paris will be a magnificent Olympic Park and the transformation of some of the world’s most beautiful and historic sites into temporary stunning stages for sport will provide unforgettable images around the globe.”

Populous Principal Francois Clement added, “Paris is one of the leading cities of the C40 focusing on tackling climate change while improving the health and wellbeing of its citizens. Paris 2024 will share with the world an unforgettable and emotional Olympic and Paralympic Games anchored in the core values and ideals of the IOC. Populous was delighted to be part of the team turning Paris into an elegant and connected Olympic Park , delivering stunning venues in one of the most prestigious World Heritage sites. Under Agenda 2020, Paris 2024 shares the rings of success with LA 2028 for a better Olympics and Paralympics Games in a better world.”

Paris 2024 will be the 13th Olympic and 7th Paralympic Games featuring designs by Populous. The firm has also completed more main Olympic stadiums than any other practice, including the main stadiums for Sydney 2000, London 2012 and Sochi 2014. 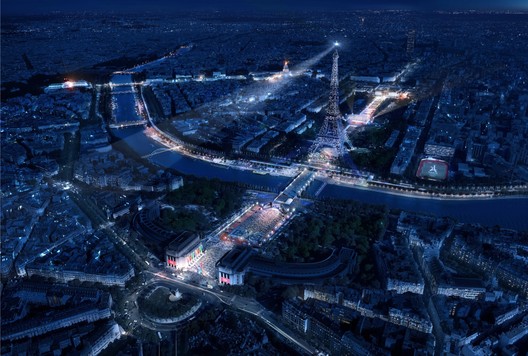