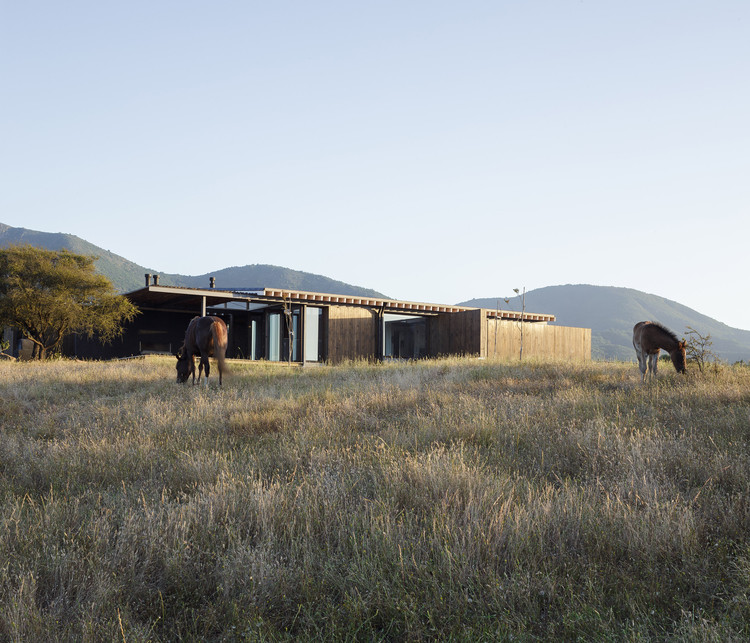 Text description provided by the architects. The Tierras Blancas house is located in a rural zone in the central valley of Chile were the Norwest wind sweeps the place most of the year and water shortage doesn't allow the presence of high vegetation. The dueling is set on soft slope hillside between three Hawthorns that were considered valuable to preserve due to their height and age. The project was conceived as a system rather than a finished piece, with the ability to be flexible in its use and allow future growth, thus defining what could be modified and what should be permanent. The program was developed through two pavilions arranged in parallel with a north- south orientation.

The space between these two volumes host the entrance and an interior patio that acts as the center of the main paths touring the house. Next to the order granted by the pavilions, the work was done defining three horizons to which a unique material was assigned. First the plinth (concrete), then the grid (steel) and finally the ceiling (laminated wood)
The first horizon is a concrete plinth that defines the contact of the piece with the ground, generating an elevated surface that recognizes the topography, configuring mismatches that become seats, furniture, and stands. Over the concrete plinth, a structure of steel pillars and beams configure a grid of 6 meters that allows a free and flexible floor plan, capable of admitting different configurations.

Different to structure, the partition walls are attached to the side of the plinth accentuating its lightness and giving a new thickness reinforced by the projected shade to the base. Over the steel structure, 80 laminated wood beams lay, distributed uniformly, to create a cover like a kind of inclined mantle that generates a continuous plane that looks from the distant views and allows the passage of the light.