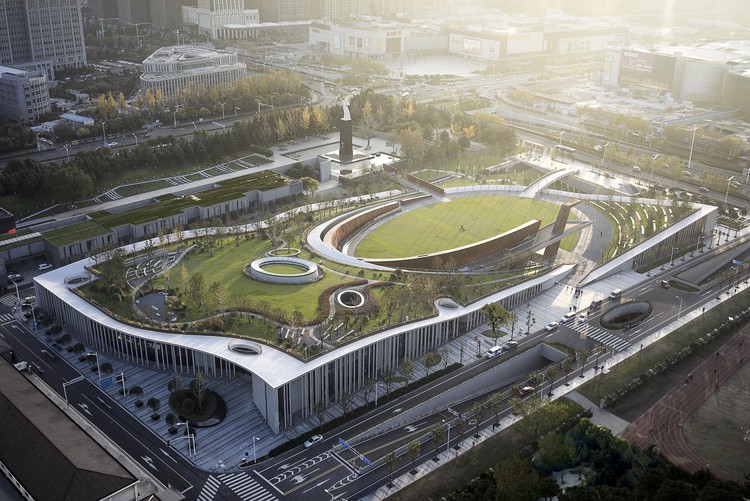 Text description provided by the architects. The Memorial Hall of the Victims in Nanjing Massacre by Japanese Invaders, Phase III was to commemorate the surrender of Japanese troops in Nanjing on September 9, 1945, and highlight the theme-the victory of the Anti-Japanese War. The idea is to express the feelings of victory and fulfillment.

Commemoration is a continuation of a city's memory.
The spatial sequence consisted by the Broken-knife, the Memorial Square, the Death Chamber, the Sacrificial Courtyard and the Peace Park, which open a complete narrative chapter of the Jiangdong Gate memorial. It is an important urban memory of Nanjing.

The Phase III as the expansion project of the Jiangdong Gate memorial, which not only supplement urban functions, extend visitors circulation, highlight emotional atmosphere of different themes, but also extend the city memory. The expansion section focuses on the arduous journey of the Anti-Japanese War, the joy of victory, and vision of mankind's peaceful fulfillment.

The position of the scheme is harmony without uniformity. The form of the Phase III is integrated with the second phase, and it is integrated into the urban life in a more open, inclusive, friendly and natural way. The earth-sheltered architecture reduces the pressure against the surrounding urban architecture and space, and the curvilinear architectural form is softly harmony with the green trees and grass. The facade of the new pavilion continues to be gray, with these fair-bare concrete columns in the face of the urban space, which show the memorial features of the new pavilion.

The center of the site is an oval memorial square, which symbolizes the victory of China's Anti-Japanese War and the vision of "completeness". The whole building presents a modest and downy form, being a green park that is integrated into urban life. Among them is a "victory road", symbolizing the struggle for victory. The land around the memorial square is slightly uplifting, forming semi-enclosed space, blocking parts of the city combining with green trees, to ensure that the square is quiet and private, which also provides the public with a recreation place. People can rest, run, walk, wander, talk and enjoy themselves.

New museum is a complex of a functional composition and opening, except the victory memorial square, green park, also contains the world's anti-fascism war memorial hall, bus station, community garage, bicycle garage, commercial supporting facilities, office, etc. The north and west of the site is connected with the subway, tunnel and surrounding urban space by setting the sink courtyard and ramp, which comb and update of the surrounding urban traffic in general, effectively improve and supplement the museum visiting circulation and traffic organization, to provide a convenient, open and composite space node for city.

Open and accessible are important features of the new museum. When the memorial hall and new museum are closed, other functions can continue to provide social services. Through the design of the lighting, the square has a different view at day and night, becoming a public day- night park.

Peace and fulfillment, the humble and soft form is the most important expression of the project. The gentle natural curve, green and open grassland makes the environment quiet and relaxed, while expressing commemoration, it also provides a friendly and relaxing recreation place for the public.

In the soft green foil, the dark red arc victory wall is even visible. The wall of victory is made of dark red rust plate that can highlight the sense of history and vicissitudes. The wall of victory is extended by negative one layer, the wall is three-dimensional surface, and the surface texture is formed through the separation of steel plate and the embedded lamp groove, it symbolize the historical memory "Born of Fire" of Chinese nation, and becomes the main landscape of green square. The highest point of the wall of victory is the victory torch, which will ignite when it is in events.

The facade of the new pavilion is made of a single cast of fair-bare concrete, plain and thick fair-bare concrete can not only highlight the architectural commemorative features, but also accord with the quiet and peaceful architectural atmosphere. The concrete columns in the outer facade cut the sunlight into strips and form an endless rhythm. Beneath the colonnade is the grey rubble floor, which naturally formed a buffer against the city, and reinforced the architectural memory and the sense of place.

The ramp of the back victory wall is the road to victory, slowly rise, forming the valley-spatial-experience through curved roof and width-changed ramp, when going to the top of the ramp, is a large cantilever platform, the space suddenly enlightened. Here people can overlook the victory square, symbolizing the “route of victory” from darkness to light. Entering into the memorial hall by the “route of victory”, an elliptic cone volume pass through all the floors as the core of the interior space, acting as the preface hall of the memorial museum. The volume provides the contacts between up and down. The soft natural light pass through the elliptical skylights on the top of the volume, create a quiet atmosphere in the memorial hall.

The Phase III expansion project is a complement and continuation of The Memorial Hall of the Victims in Nanjing Massacre by Japanese Invaders. It has the characteristics of openness and publicity, the nature and the commemoration. Here is a place to accommodate historical memories and current lives, victory joy and death grieve, where people can remember, rest, relax, walk and play. We hope that the project will be accepted and loved by the city and its residents. 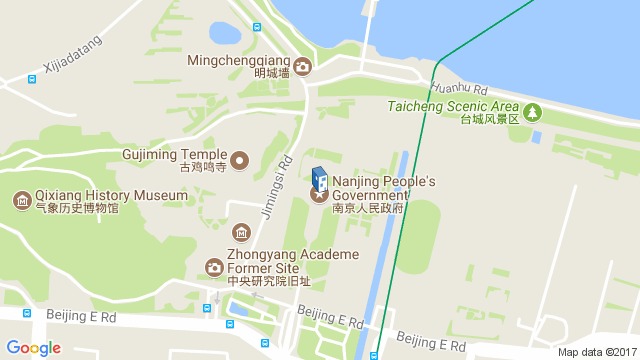 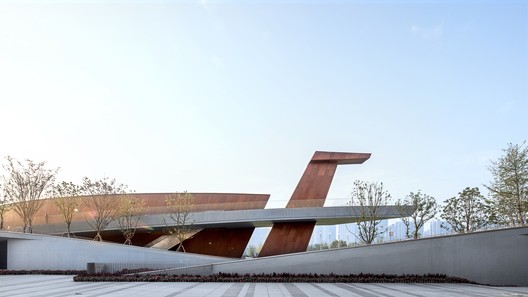 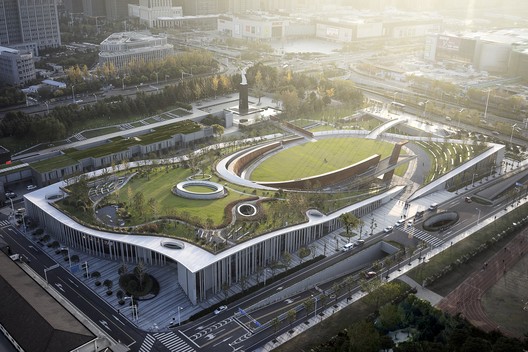