Read more
Save
The Best Structures of Burning Man 2017

The week of Burning Man 2017 is halfway through, and glimpses of the event are starting to make their rounds through the social mediasphere. Under the theme of “Radical Ritual,” this year features as many impressive structures and sculptures as ever, including a central temple holding the wooden man built to commemorate the Golden Spike, the ceremonial final spike driven to join the rails of the United States’ first transcontinental railroad.

Check out our favorite structures from the event, below.

The Best Structures of Burning Man 2016

Burning Man 2016 is underway in the temporary city of Black Rock City, Nevada - meaning for one week, thousands of festival goers will romp through the desert taking pictures of the hundreds of art and architectural installations constructed for the event.

The Best Structures of Burning Man 2015

It has been a week since the conclusion of this year's Burning Man festival in Black Rock City, Nevada, and images of its most imaginative structures are still surfacing. Even Bjarke Ingels has published a few of his favorite findings from the week-long event. 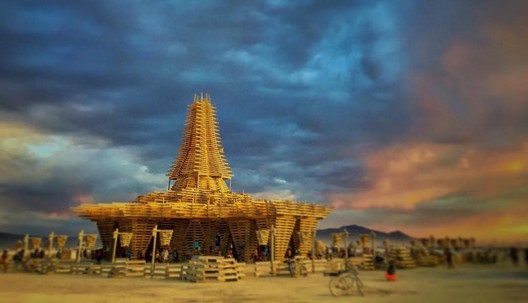