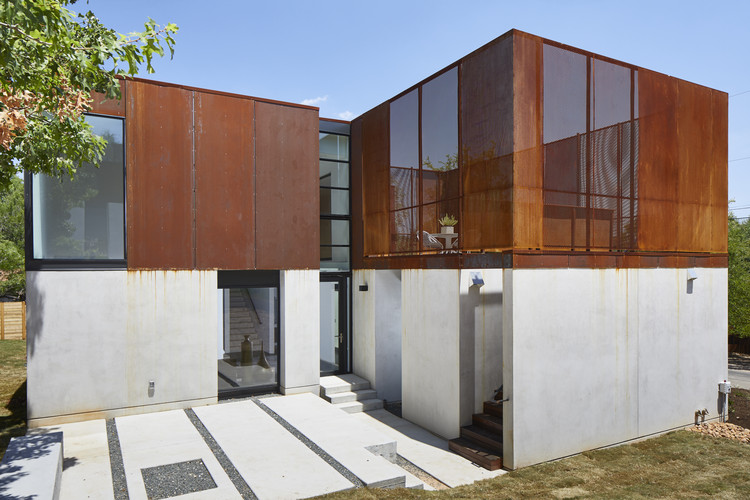 Sky Crown Terraces are two identical and adjacent houses designed and built by Bercy Chen Studio in Austin, Texas. The monolithic form, courtyards, and habitable flat roofs evoke the vernacular of the American Southwest interpreted by Modernism. Inspired by the sculpture of Michael Heizer, Eduardo Chillida, and Jorge Yazpik, the strategy of volumetric subtraction enhances the materiality of the basic conception of the houses as stucco boxes crowned by steel panels. The consequentiality of the vernacular together with the elegance of orthogonal abstraction clad in nakedly simple materials do nothing to distract from the peculiar delights of the understated landscape and raw climate of the Texas Hill Country.

Emphatic dichotomy
The bright Texas sun invites a lightness of being and a vigorous outdoor culture in Austin that finds in stark shadows sheltered respite from the intense heat. The exterior walls juxtapose the slow coolness of stucco with the searing heat associated with the thermal conductivity and production of steel. On the ground level, the exterior stucco walls return in plan around shadowy recessed apertures to reinforce spatially the gravity and thickness of their material in contrast with the thinness of the continuous band of steel panels that clad the upper level. Flush with the steel, the windows of the upper level freely float to the edges of the wall planes, further dematerializing them.

Nature penetrating interior life
Four voids extending from ground to sky cleave each of the four sides of each house, bringing nature deep into the double-height entry vestibule at the heart of the house. Through double-height glass walls framed by these four canyons of nature enters light from the four cardinal directions. Each cardinal direction deploys its own palette of light, shifting in color and intensity as the sun courses across the sky.

Rooms outdoors
The shallowest of the four canyons leads to a 16’ x 22’ courtyard carved from one of the corners of the quadrilateral mass. The courtyard is sunken from the surrounding landscape in one of the houses, while its grade is elevated in the other. In both cases, a flight of stairs connects it directly to a 19’ x 31’ roof deck that occupies the entire upper half of one of the volumetric quadrants delineated by the canyons.

Coronation of the heavens
The roof deck is defined as an outdoor room by the continuation of the steel cladding the upper half of the exterior walls as perforated screens of the same material. While floor-to-ceiling windows provide unimpeded horizontal views from the interior, the screens direct attention to the cosmic dance above. Appearing to dissolve into the sky from certain distances and vantages, their varying opacity modulates the view of the surrounding trees and hills.

"Texas Wabi-Sabi"
The steel panels are pre-oxidized to permit controlled staining of the high-quality, pristine white stucco below them, fusing the two materials in streaks of color, as if painting a blank canvas in drips of mineral deposits as found on the cliffs of the surrounding Texas Hill Country. 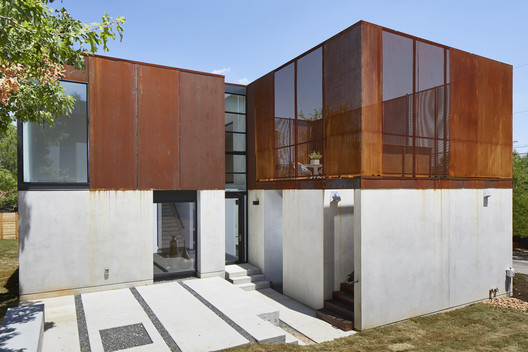