Text description provided by the architects. The site is located along an arterial road that runs through the countryside. In the neighborhood stand private residences and a grove of the village shrine surrounding a passage to the shrine. The building is made of mortar and galvanized steel sheet which reflects dull light, making it look massive. It is laid out to be accommodated within the L-shaped lot and stands to face the shrine on the opposite side.

The building is to be used as a studio and gallery of the photographer and his residence as well.The client requested to unite the studio where he produces works with his living space. Thus, I came up with an optimum plan by clarifying how the resident wants to live instead of segmenting the space by function.

The dim passage from the entrance approach invites visitors into the innermost space while guiding them with light thrown from the ceiling of the connected gallery. The gallery clips out a landscape with the opening to look like an exhibition. Its contrasted scale and natural light resonate with each other.

The space that quietly inspires a feeling of exaltation among ordinary life also plays a role of the photogenic shooting location.

The long thin passage serving as an alley to go around the gallery has other functions than a mere pathway; it is also used as a space to post artworks and photos on the wall. It is beautifully themed with sight switching, different ceiling heights, and shade and shadow created by natural light.

The hall that is located at the center of the building with different floor levels plays a role of a hub which connects with each space. It also incorporates plumbing equipment, a counter, and a staircase that are necessary for living, and is connected to an approach from the courtyard, thus not only providing functional comfort but also displaying scenic beauty.

The building used as a living space also offers a dynamic space with proportion and scale that allow it to serve as a photo studio. The light coming through the high-side light envelops the room, enabling photo-shooting with natural light.

Photo shooting equipment, vintage furniture, musical instrument, and artworks are placed here and there, blending in with space. It acts in concert with the photographer’s feeling and aesthetic and acts as the base to produce new creativity and activities. 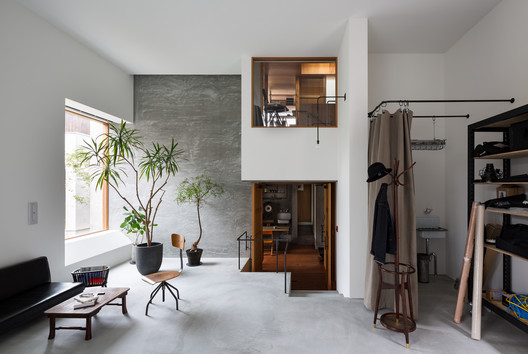