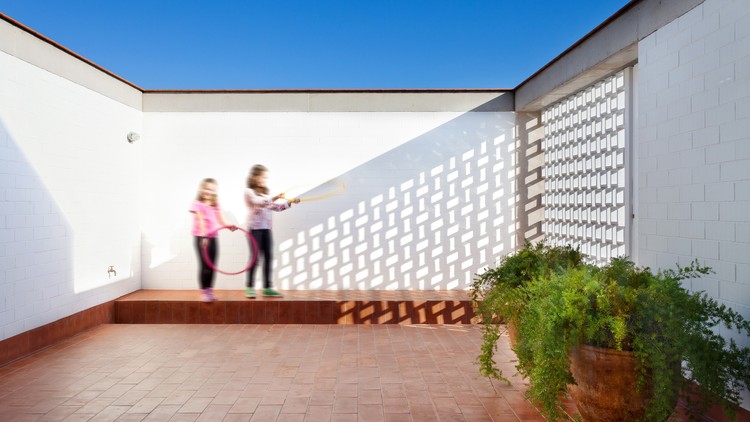 Text description provided by the architects. L’ Armentera is a small town near the Fluvia river and the Emporda marshes, at about 6 Km from the coastline, with a lanscape full of fruit trees fields. In 2005, its urban growth was approved through the urbanization of a former farming area at the south side of the village, planned with straight streets and rectangular plots. The house places itself on a tiny plot, facing the street on one side and sharing the other three sides with the neighbor plots.

The closeness of the present and future neighbours (separated 3+3 metres as the urban planning allows), the difficulty to enjoy the distant views of the beautiful Emporda landscape, and the paid attention to the climatology (protection from north wind and getting the maximum use of the sun and easterly winds), define the proposal.

The plot dimensions (18x24 metres) don’t allow to include the whole functional programme in the ground floor without renouncing an exterior space that extends the interior common spaces: living room, dining room, kitchen and studio. Thus, ground floor shapes an “L” that faces a south oriented patio, protecting the house from the north wind and the street. The first floor stands on the longitudinal axis with an apparently blind façades that avoid the own or any others direct views from the street and neighbour plots.

Construction becomes the appearance. Façades are composed by a double ceramic wall, the interior is the main wall and the exterior fixed to the former and finished with lime mortar, defines an air gap with small ventilation that contains the continuous thermal insulation. The openings, with the exterior carpentry in the same plane of the thermal insulation, are protected from sun with ceramic latticework or rotang louver sheets. This allows a pleasant and excellent light and ventilation control during summer and spring, avoiding the existence of air conditioning. Roofs are partly smooth sloped in order to respect the urban regulations. There are no ceilings and thus, concrete joists, ceramic beam filler blocks and copper pipes for heating (produced by a low temperature aerothermal technology device) are exposed. Pavements in the ground floor are exposed reinforced concrete in the interior and exterior. A small swimming pool with the edge lifted as a bench is built in the garden and desired privacy of patio is trusted in the climbing plants planted through the perimeter fences.