Save
Rehabilitation of a Traditional Housing in Moscoso / LIQE arquitectura 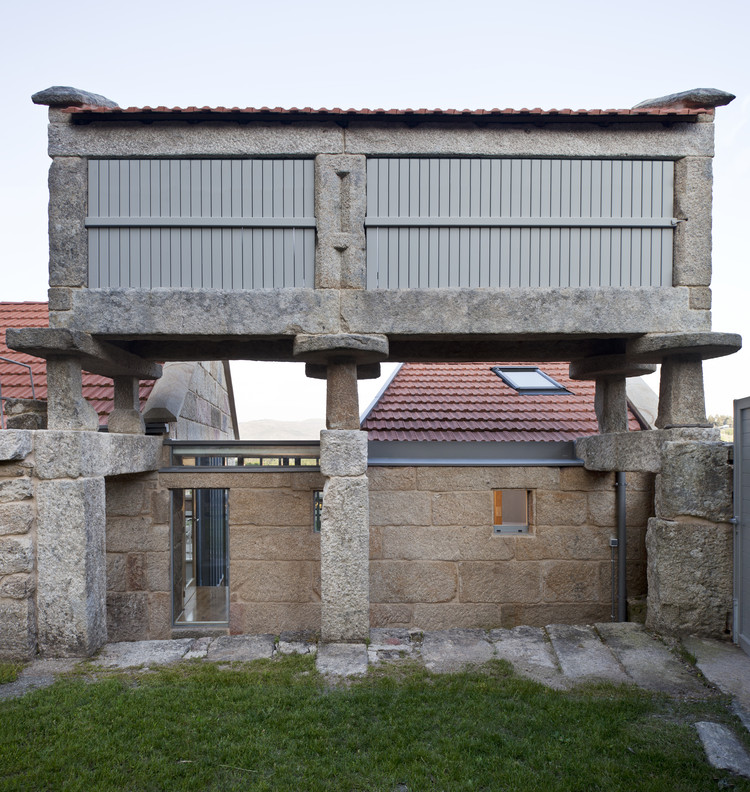 Text description provided by the architects. Usually, a project involves creating something out of nothing; but sometimes, as in this case, it is about strengthening something that was already there. A long stone building, with a powerful balcony facing the valley, to the north.

An elevated shed leaning on a warped and also excessively long wood beam, with three facades made out of stone and one out of wood, to the south. The Cruceiro Grande, where three religious processions become one, is out on the street, to the east. And an impressive Hórreo supported in stone beams under which one enters the garden, to the west.

And then, in the center: the "eira", the work yard, sheltered from the wind, the main focus of everything around it. This time the project is about prolonging the life of these elements in a world that is no longer their own. Hórreo and Cruceiro will remain as traces of the past. The patio will become the entrance to the home, the hub of human activity.

The shed is no longer needed as a warehouse, and it transforms into a bedroom. For this purpose a linking piece is born: a bridge that links both bodies in a transparent continuum that snaps into the stone façade of the house, that covers two existing windows, and that continues until absorbing the new supporting facade with a wooden structure that marks off the shed.

A single gesture that brings transparency; and with its light, natural heating, and visual connection; while at the same time being integrated with the traditional building and filtering from the outside through fins that continue the Hórreo façade throughout the house and towards the balcony roof and the garage wall, unifying the work.

The current staircase sitting in the courtyard is moved to the interior of the house, placed on the opposite face of the same wall, easing the transition between outside and inside, taking form with the gradual transformation of granite into Chestnut wood: from the cold exterior to the warm interior.

Once inside, three large sliding panels work as a second privacy filter, closing a dining area and a kitchen that evoke the cellars and stables that originally occupied the lower levels of the house, by using rows of concrete vaults for the ceiling. Ceramic floor tiles are combined in gray tones with items made of wood in doors, windows, and pavements, enhancing the transition to the upper floor, where wood presence grows larger.

Above it all, a large corridor in the inside replicates the one located outside, defined by the constant search for spatial continuity: Vertically a double height space is generated towards the office located in the attic, and a cascade of light is eased towards the ground floor with a transparent pavement. Horizontally the patio is inserted into the house thanks to the transparency of the walkway, giving birth to a light continuum that contrasts with the pre-existing small openings in the first floor.