Welcome to the latest installment of #donotsettle extra, the series in which Wahyu Pratomo and Kris Provoost accompany some of their #donotsettle videos with in-depth textual analysis of the buildings they visit.

After last month’s visit to OMA’s first building in Shanghai, we stayed in China and headed north—far north. We are happy to take you to a building that has been high on our “to-do list.” Harbin, a provincial capital city in the north-east of China, has previously only been known for the large-scale ice sculptures that appear during the winter months. In the past two years, this has changed, at least for the architecture geeks spread around the world.

Ma Yansong and his team at MAD Architects designed and built the Harbin Opera House in a new part of the city. First announced in 2013, the building was completed at the end of 2015. Since then, an endless stream of breathtaking photos has been shared on the internet. We had to see this project with our own eyes! We ventured out to Harbin and spent a day at the Opera. 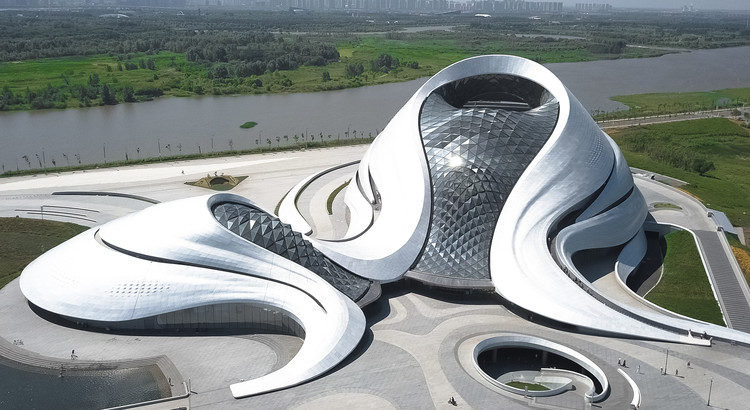 Seemingly rising up from the landscape, two buildings become visible from afar. In a vast open landscape, the Harbin Opera House forms the centerpiece of a new Culture Island. Driving closer, we could not stop staring at the organic lines and shapes forming the buildings. We were dropped at the foot of a large staircase leading up to a welcoming plaza. Walking up, we were full of anticipation and curiosity about how this Opera House is perceived at first sight.

Arriving in the early morning, the plaza was already bursting with activity. What a beautiful sight for our still slightly tired eyes. From young kids to the elderly, the plaza proved to be a popular spot for Harbiners and tourists. And why wouldn’t it? With this architecture as a backdrop, we could spend days on end observing every corner of this building. (But wait! There is not one corner in this building. Everything blends together!) The same curiosity we felt was also visible in the early morning visitors. Snapping along, touching and walking across the large plaza, everybody seemingly enjoying their time in the sun with MAD’s building as the ultimate destination.

Interaction With The Building

We ventured along the “mountain flanks” making our way up the building to arrive at a viewing platform overlooking the city and the open landscape. It felt like a proper mountain hike. Wherever you look, there are people using the building in creative ways to snap that unforgettable photo. Seeing the visitors interact with the building was the absolute high point of this visit. If there is one building that deserves to be described as “Instagrammable,” it’s this one. Every angle, every perspective is crafted to create a new dimension, a new world.

Blending Inside With Outside

Speaking of a new world, the interior was that and so much more. Boundaries are thrown out of the windows, largely thanks to those large, well, windows. There is no beginning, no end; it all blends together. The foyer is filled with light, merging interior and exterior. The Grand Hall is, well, grand. In every possible meaning of the word. The interior forms space after space, each with its own views, own feelings, evoking different emotions. Imagine an endless space where feelings transform from grand to intimate, from excitement to calmness, and from overwhelming to encouraging as you walk through. A space with no walls and doors, but a journey into a new dimension.

Years after seeing the first models and construction photos, we stood in front of the new Harbin Opera House. After years of anticipation, excitement, enthusiasm, and eagerness, we sat on a bench observing people interacting with the building. This project is so much more multilayered than any picture can give away. Looking back at the footage, we get the chills. This building isn’t just a building. It’s an out-of-this-world experience, a mesmerizing journey.

Thanks to the great team at MAD Architects for making this visit possible. We can’t wait to immerse ourselves in more MAD architecture soon.

Iwan Baan's Photographs of the Harbin Opera House in Winter 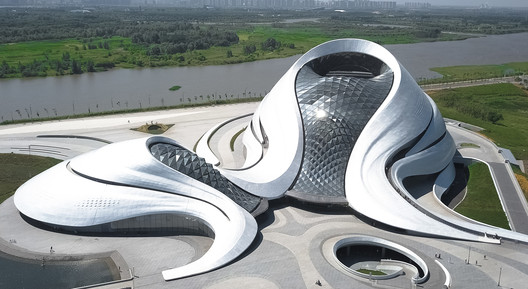