The Boston Society of Architects (BSA) has announced its finalists for the 2017 Harleston Parker Medal. Established in 1921, the medal is awarded to “the single most beautiful building or other structure” that is built in the city of Boston in the past 10 years. Established as a chapter of the AIA, the Boston Society of Architects, together with its sister organization the BSA Foundation, is committed to advocating great design and “sharing an appreciation for the built environment with the public at large.” This year’s jury led by Yugon Kim (IKD, TKSP Architects Boston) formed a panel of ten acclaimed Boston professionals representing a wide range of disciplines, from architecture to urban planning to media.

The Boston Society of Architects/AIA (BSA) reaches its sesquicentennial anniversary in 2017. That’s 150 years of design professionals working together to build often inventive and creative buildings for this city and for the people who live in it - BSA.

Want to celebrate #architecture and the #summersolstice on the water? Help the #BSA get its birthday bash off the ground at Waterfront Plaza this evening! Share your party pics using #BSA150. #design #boston #bostonarchitecture #bostonsocietyofarchitects

Last year’s winner was awarded to the Bruce C. Bolling Municipal Building (2016) by Mecanoo Architecten with Sasaki. Previous winners include the Isabella Stewart Gardner Museum Addition (2015) by Renzo Piano Building Workshop with Stantec and the Museum of Fine Arts and the Boston Art of the Americas Wing (2014) by Foster + Partners with CBT Architects.

The winner of the Harleston Parker Medal will be announced at the 7th BSA Design Awards Gala on Thursday, January 18, 2018. For more information on the Award, visit the BSA website here.

News via: Boston Society of Architects/AIA.

The Boston Society of Architects (BSA) has announced the winners of the Northern Avenue Bridge Ideas Competition. Launched in March, the competition sought to gather ideas for the future of the bridge that center around improving mobility, honoring history, and creating destination. The bridge, which opened in 1908, was closed in December 2014 due to structural integrity concerns. 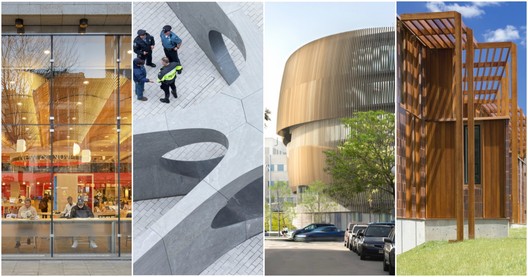