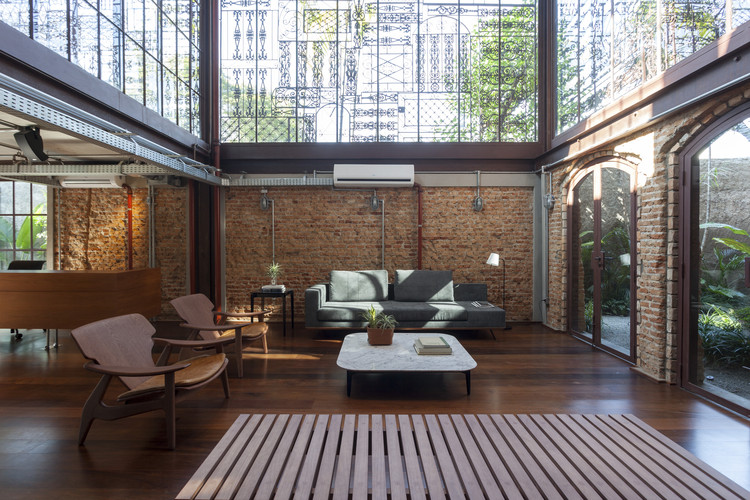 Text description provided by the architects. AKQA, an international advertising agency that planned to come to Brazil, commissioned Estúdio Penha to design a home-based office with the warmth and soul characteristic of our projects. There were many challenges, a house that should adapt to a great program of needs for its complete functioning: spaces for the clients conviviality, production, creators and all the support structure. However, its adaptation to the new reality required a horizontal and vertical enlargement.

The architecture of the 70's townhouse was created by the former owner, with arches and massive brick walls that we wanted to preserve. The starting points were: to maintain the constructive memory that should be valued, to integrate the new volumes with the existing ones, to create a garden that permeates the whole house and to think about sustainable solutions of consumption.

It was done a project where most of the rooms of the two floors were used. In the ground floor are the main areas of coustomers and support to them, in the external environment all the setbacks were used as permeable areas, creating a large garden around the house and in the background, where the old pool existed, a bleacher for projections of films and work presentations was projected. The main access made by a rusty iron box that gives to the reception and exhibition space has a triple ceiling height that goes up to the sloping ceiling and invites the visitor to a curious look upwards.

The facade wall does not touch the ground, the vegetation passes underneath it creating the necessary lightness that balances with its height. The distribution hall to the meeting rooms also distributes the apparent pipes, all the infrastructure of the house and at the bottom of this, is the main meeting room - a new house volume, with dividers in glass frames that allow the contemplation of the garden from the reception.

The new vertical circulation located where it was the old stairs of the house gained prominence to have leaked elemnts as steps and guardrails made in metallic screen, it is between window frames, one big window that has vision of the lateral garden and another one with sight for the internal patio. Still thinking about the integration between interior and exterior folding doors were used, which allow a greater opening, and consequently a visual and physical connection between the rooms and the garden.

On the first floor, overlooking the back of the house, is the staff area for 40 people. Part of this room has a double foyer connected with the dining room that is on the last floor and illuminated by large frames. In front the new volume in balance, which houses the brainstorming rooms, serves as cover for the entrance and garage of the house.

For the new floor, two mezzanines: one houses the leisure area that communicates with the reception and another houses the dining room that communicates with the staff area, all integrated by a large green slab with a medium size plants. The access to this outdoor garden works through two large wooden gates that replace the walls and open to integrate the exterior with the interior and also create extra protection for the sun on the east and west facade. On rainy od cold days, a small door on this panel allows the circulation.

A roof with a thermo-acoustical tile inclined to the north facade was made, which helps to control the insolation. On the south facade a large glazed window frame allows the entrance of natural light throughout the mezzanines. An outside staircade like in New York in the back of the house meets the demands of safety.

The element that brings identity for this project is a patchwork of old bars of iron which acts as a brise soleil for the new volumes of the house, they draw the floor as a lace made by the light of the morning sun.

One of the aims of the project is to make clear and harmonious the contrast between the old house and the new interventions, thus, the old walls were peeled to make the bricks appear. For new internal walls, we used structural concrete block with linear pagination, in opposition to the tied pagination of the existing bricks. On the outside the new walls and small walls, including existing window closures, were made of precast concrete. The spans of the windows of the old building were preserved, enclosed by new windows to maintain the language of overlap between the old and the new.

It was necessary to design a complex network of ducts and cables for electric, hydraulic, lighting, network, sound, sprinklers, air conditioning, and this was done in an apparent way, making clear the complex infrastructure that makes the house "work", an aesthetic decision that is not limited to this, facilitates the maintenance.

The large industrial type iron frames allow the entrance of natural light during the day and constant integration with the outside gardens and view of th city on the rooftop.

New technologies and awareness to conservation of natural resources of the planet permeate the project. This way reused or certified wood was used and materials that already made up the house like walls and tiles were utilized. In this same sense, the use of sustainable systems such as solar panels, rainwater collection for reuse and LED lighting, means that the use of the house is made in a way to minimize the consumption of electric energy and treated water.

For thi project implantation, the old house needed a structural reinforcement. We opted for a metal structure where the pillars become an important strucutural element, an aesthetic element that makes the vertical connection of all floors, new elements and remnants.

As the idea of integration permeates every project, it was also necessary to think of privacy protection and tranquility for work, so acoustic clouds were adopted in the production rooms and main meeting room as well as acoustic doors.

The interior design was assembled from four sources: Designers who made iconic Brazilian pieces, such as Sergio Rodrigues and Lina Bo Bardi; Comtemporary Brazilian designers like Jader Almeida, Marcus Ferreira and Felipe Protti, whose ieces talk directly with the first ones mentioned; And even pieces of international designers mainly Scandinavian furniture such as Hee Welling chairs, Hans Wegner and luminaires of icons such as Fabien Dumas, Ingo Maurer and Tom Dixon. Completing the proposal, some pieces were designed by Estúdio Penha fulfilling specific tasks of the daily routine of the agency, with materials that maintain a direct dialogue with the other pieces.

As de decoration is fragmented in different rooms, it was necessary to choose elements that made them part of a whole. And thit is done through the colors and materials: natural iron, wood, natural leather, stones, marbles and fabrics of neutral tones. In addition to maintaining a conceptual and visual unity, these elements do not compete with the agency's striking architecture, it assimilate and complement each other.

All this results in ambiences that have local characteristcs, but avoiding stereotypes. The decoration unites the identity of Brazilian modernism acclaimed in the world with globally know iconic pieces, configuring discrete, elegant and at the same time personality rooms. 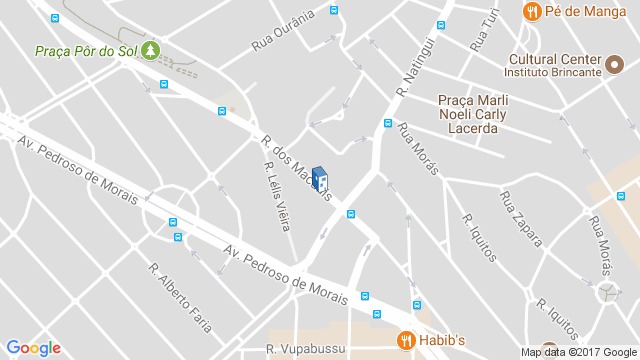