gmp Architeckten (von Gerkan, Marg and Partners) has revealed their competition-winning design for a 150 meter-tall glass tower at the new global headquarters . Located across from the former Expo site on the banks of the Huangpu River, the tower features a vertically structured glass facade offering expansive views and reflecting its impressive surroundings back towards visitors to the site. 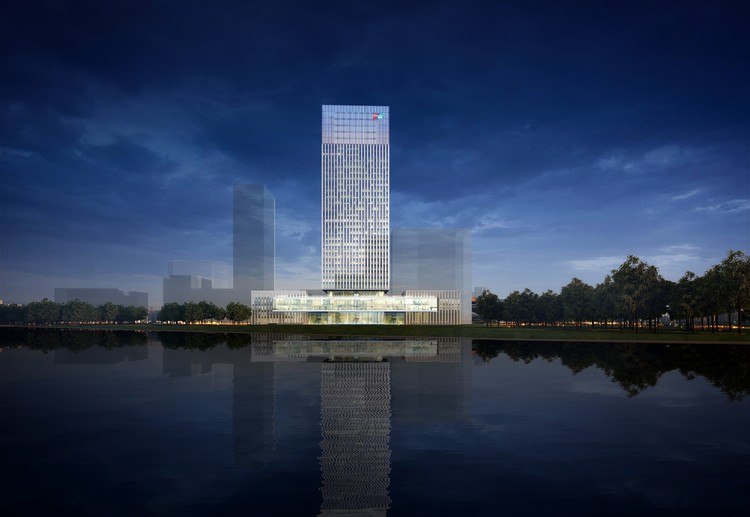 The design of the 90,000-square-meter (968,700-square-foot) complex consists of three squares, with a central high-rise flanked by two five-story buildings at its base, each slightly shifted to match the geometry of the site. A glass bridge at the 4th and 5th floors connecting the buildings together doubles as a covered entrance area and allows access from both the south and north directions.

Important program elements, such as the entrance hall, the lounge, exhibition areas, the employee cafeteria, meeting rooms and management offices, are emphasized through subtle differentiation in the facade; when brought together, these elements create a logical composition of verticals and horizontals.

“Thanks to finely tuned detailing involving the glass facade and the structural steelwork, which was designed as a “tube-in-tube” system in cooperation with schlaich bergermann partner (sbp), it is possible to integrate the upright supports in the plane of the facade, creating shallow facade depths and, on the inside, functional areas without vertical support members,” explain the architects. “In the plinth area, the columns have been gathered to converge into four points, which allows for an open and transparent design of the entrance areas.”

gmp Architekten was chosen as the competition winner in 2015.