Pritzker Prize-winning architect Tadao Ando has designed a monumental lavender-covered temple enveloping a giant statue of Buddha at the Makomanai Takino Cemetery in the northern Japanese city of Sapporo. 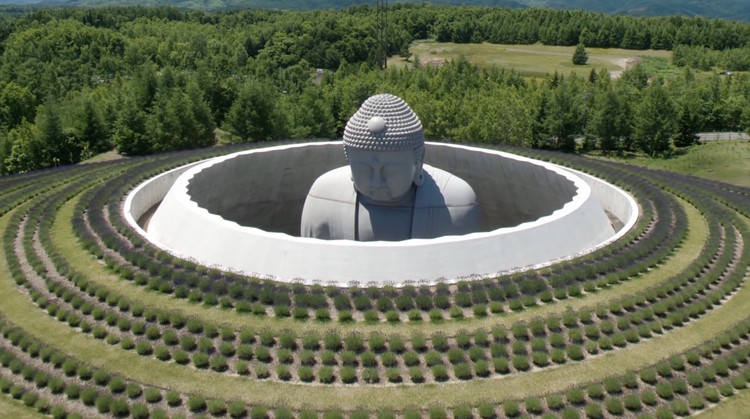 Before the temple was completed, the 44-foot-tall Buddha sculpture stood alone in a field for 15 years. Soon after its completion, the client realized the stone structure was out of scale on its own, giving visitors an uneasy sensation. For that reason, they decided to hire Ando to create a more serene architectural procession for the site.

The resulting temple envelops the statue, leaving only the top of its head visible from outside the hill, planted with 150,000 lavenders that allow the landscape to change from green in spring to purple in summer to white with snow in winter. Visitors now approach the Buddha through a 130-foot-long passageway into the circular space surrounding the statue.

“The aim of this project was to build a prayer hall that would enhance the attractiveness of a stone Buddha sculpted 15 years ago,” explained Ando in an essay for DOMUS magazine.

“Our idea was to cover the Buddha below the head with a hill of lavender plants. We called the idea the ‘head-out Buddha’. Embedded under the hill are a 40-metre approach tunnel and a rotunda embracing the statue.”

“The design intention was to create a vivid spatial sequence, beginning with the long approach through the tunnel in order to heighten anticipation of the statue, which is invisible from the outside. When the hall is reached, visitors look up at the Buddha, whose head is encircled by a halo of sky at the end of the tunnel.” 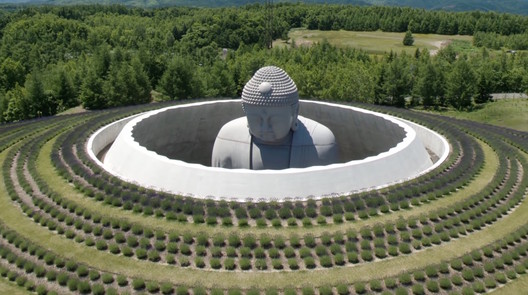