After starting and stopping for nearly 20 years, a 17-story Deconstructivist tower by Eric Owen Moss Architects seems to finally be underway in Los Angeles’ Culver City neighborhood after construction permits were approved earlier this year. Originally known as the Glass Tower, the project has been revived as (W)rapper, a nod to the structure’s enveloping steel exoskeleton.

A new flythrough video of the project shows the inside and out of the 230-foot tower, including its double-height and mezzanine office levels, as well as a spacious rooftop terrace. In total, the building will offer 160,000 square feet of office space and two levels of underground parking. Located adjacent to the Expo Line’s LA Cienega/Jefferson station, the project was originally envisioned as a multi-tower development in the late 90s, before being reduced to its current form.

(W)rapper is the latest project designed by Eric Owen Moss Architects for developer Samitaur Constructs in Culver City’s Hayden Tract district, including “Vespertine,” “Stealth” and “Pterodactyl.” According to Urbanize LA, construction work is scheduled to begin in the next two months.

The glass tower by Eric Owen Moss Architects is encouraging the re-development of South Central Los Angeles with this project. The building has been in planning since the nineties but was stalled for some years until it was re-designed in 2006 as a single tower. A rail line installed nearby spurred the redesign. 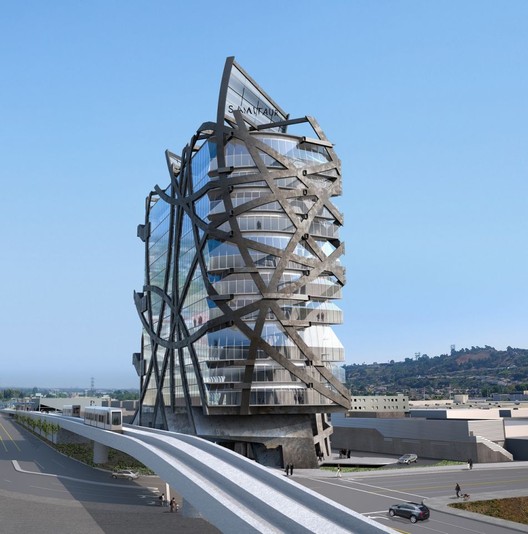