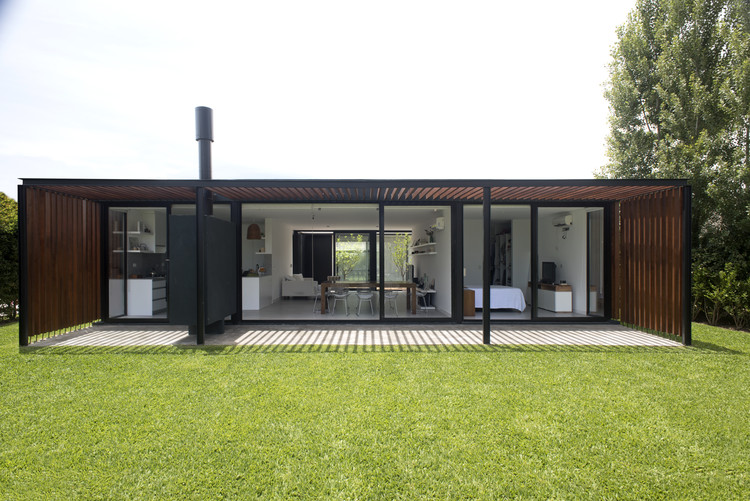 Text description provided by the architects. After carrying out some market research on the middle classes’ housing needs in the Northern Greater Buenos Aires area, our client, a medium sized building company, learned how scarce commercial offer of high constructive and architectural quality houses is as opposed to how greater the demand for it. In view of these results, they decided to have a replicable housing prototype designed for them by our Studio: 2HL House

A single story house was commissioned, that should be adaptable to medium sized plots (17 to 20 m wide and 35 to 40 m long) and should not have more than 170 m2 in total. The programme—set up by the client—aimed at fulfilling an average family’s needs: a social area, composed of integrated living-dining-room and kitchen, a master suite, two smaller bedrooms sharing a bathroom, service areas, a solarium, a swimming pool, and a grill.

Based on these requirements, the Studio projected a house in a pure prism organized over a 1 m2 modulated grid, with mostly blind side walls and open front and rear facades.

We suggested that all rooms should be disposed around a central patio, as not only would it improve the interior lighting but also, due to the floor plan organization, would encourage cross ventilation throughout all areas of the house.

Speed and constructive practicality, along with costs control, determined the choice of materials. Instead of the exposed concrete we traditionally use, clay hollow brick masonry was selected; also, instead of going for concrete flooring, it was decided that 1 mt wide square cement-looking porcelain floor tiles would be used.

Aiming at preserving the intimacy of the front rooms—while preventing them from losing their views of the outside—and controlling direct sunlight in the inside, wooden vertical parasols and a pergola, sustained by double-T iron beams, were designed. A similar solution was employed on the rear, to produce a veranda that would project the master suite and the social area.

With the purpose of projecting the light and the virtually expanding the inside, a bright chromatic palette was suggested, while darker colors were proposed for the outside so that it would dialogue with the natural surroundings without competing with them.

The first house of the series was built in 2016 in La Comarca, a suburban neighborhood near Nordelta in Tigre, Province of Buenos Aires.