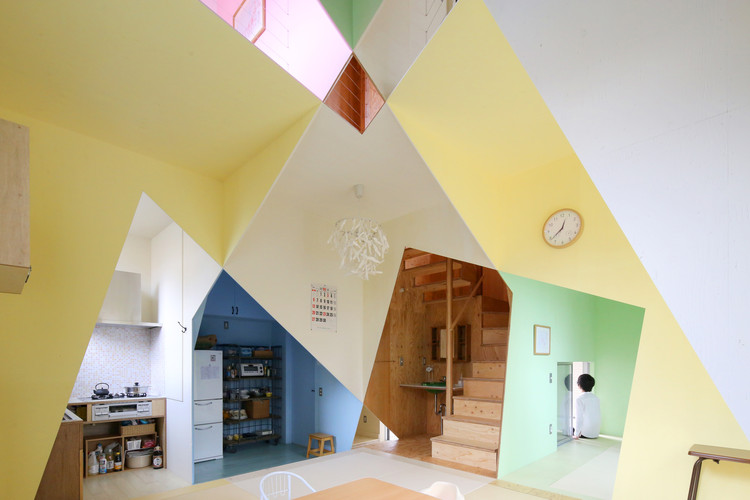 Text description provided by the architects. Overcrowded spatiality It is a small house for a family of four who is built on the flagpole site surrounded by houses in Tokyo. After the war the field spread in this area became population and land price increased, became the current high density residential area. The flagpole site is the smallest unit of land division. And the house will be divided into even smaller rooms. I started designing with a desire to discover overcrowding spatiality by drilling holes in the grid.

Building with a hole is the third one. In order to create "high-density scenery" where you can see plenty of places, I set the formula "spatial density = number of rooms / volume". If you can see many rooms in a smaller space, the space density will rise.

The shape of the hole appears as the set of the opening in a wall and a floor. I show you figures below ( fig. Shape of hole ). The holes in Kame house and Apartment - house were polyhedron as a volume, but the hole in Ana house changes to an overlapping of the plane opening such as a square or a triangle on the wall or the floor, making it difficult to recognize it as a volume. Those which were 3D holes subordinate to the 3D grit so far changed to 2D holes which exist autonomously in 3D grit here. This appears in the interior of the Ana house at the intersection points of straight lines at the walls and floor openings.( fig. interior of hole ) This point is a place where the cut surfaces of the four rooms can be seen, three depths in front - middle - back are adjacent to one point, and a high - density scenery compressed volume which is the former denominator of the former is made I can say that.

This is an architecture that built a hole simultaneously in the grit. If I want to make high-density scenery, Is it possible that two or more spaces overlap and exist simultaneously? It can not be made in the space integrated into the grid. The cubism painting disassembled the integration by visual parsing, and multiple viewpoints were placed side by side in one picture. It acquired simultaneity and transparency and discovered the freedom of the receiver and the new depth. On the architecture, the scenery in the hole of Ana house that autonomously built in the daily grit of the conventional wooden frame could be the cubism in architecture? 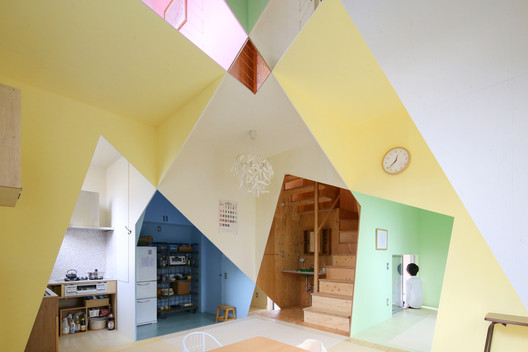