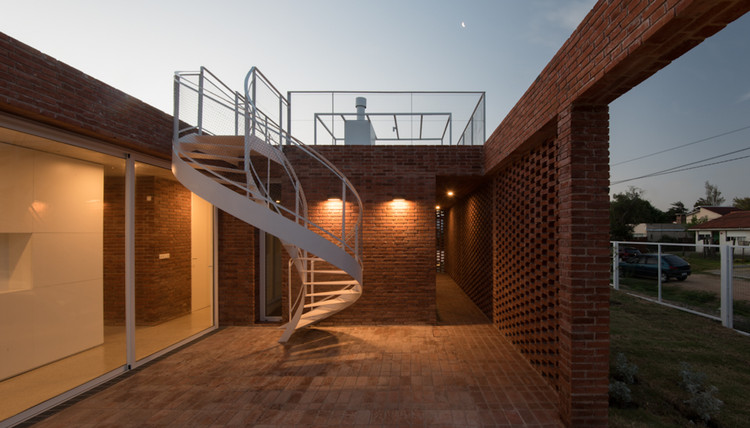 Text description provided by the architects. The house is the first prize of the characteristic architectural Housing Contest “Arquitectura RIFA G’2010” from Facultad de Arquitectura, Diseño y Urbanismo, FADU - UDELAR. This is a Student Contest, once they select the winning proposal begins a process advised of development that culminates with the construction of the winning project. The property is located in a corner in front of the sea in Ciudad de la Costa, a suburban area adjacent to Montevideo. The low vegetation on the side of the beach and the wide avenue, make it difficult to see toward the sea on the ground floor. Here is the “Key” of the project. The main spaces in relation to the ground or with the view on an upper floor?

The short facade facing the Rambla and account with a non-buildable area of 15m, which conditions its implementation toward the bottom. The choose, to maximize the use of the venue, solving the housing in a massive volume on the ground floor, appropriating the extensions to the outdoor spaces, looking for care privacy with respect to the nearest street and communicate fluently interior and exterior spaces in the longitudinal direction. The access is given by a patio, generating a controlled outer space also works, next to the kitchen, separator of the social areas and the most deprived of housing. It is the spiral staircase of access to the barbecue and upper terrace, generating a functional circuitry. The living-dining area is located toward the Rambla, using the entire width of the constructible space. It is conceived as an open space and fluid, with both the more intimate patio access as the front garden. In the farthest part of the visual and sound pollution of the Rambla are the bedrooms and services. The services are conceived as a nucleus, also playing with the logic of the massive volume. In contrast the divisions of the rest of the interior spaces are lightweight enclosures, it is the furniture that generate the separations. The two main bedrooms facing the street perpendicular to the coast, and the area next to it, it is proposed a semi-outdoor gallery permeable, which allows a visual filter to the outside, in addition to providing an extension to the same, creating a pleasant microclimate in the summer months, and allowing the entry of the sun in the coldest months.

With regard to the speech raised, we look to the ground floor is a massive volume, while the barbecue is a lightweight and transparent. We found on the brick as a material capable of achieving a volume hard and in turn with the sufficient versatility for different types of permeability thus regulating privacy and light keeping the reading of rustic and heavy volume. At the same time, allows a continuous surround on all sides of the prism, including the deck, where is implemented a system of on high ceiling to achieve this continuity material only. We studied carefully the rigging of brick, allowing the permeability when needed without interrupting the pace of the carcass dissection.

The treatment is quite simple since you are looking for the protagonist of the massif of brick. Toward the Rambla is raised against the denser vegetation limit to generate sound and visual privacy and leaving a large esplanade green as an extension of the dwelling. The courtyard of the fund has a different character, more private and service