Text description provided by the architects. Socially and professionally a couple desired to live in an urban environment. However, living in the city didn’t afford the lifestyle they wanted for their children as they approached school age. To compromise between remaining close to the city while raising their family, they relocated to the suburbs. Their goal was to create a strong sense of place in an environment with close neighbors on all sides of their property. The history of the community they chose, an early Quaker settlement, inspired the solution. Based on the Quaker tenants of simplicity, humility, and inner focus, the house is broken into a series of modest gabled structures, each one focused inward on its own garden courtyard instead of out to the surrounding neighbors.

The simplicity of each courtyard distills the experience of nature, encouraging one to appreciate its subtleties. Every interior space is connected to the exterior on two sides. The layering of spaces from exterior to interior to courtyard collapses the boundaries between them. From selected vantage points, one may see across multiple spaces and courtyards to framed views beyond. Each volume has a sculpted roof that funnels light and air into the center of the structure.

The detailing of materials accentuates the central courtyard. The oak floor and weathered oak ceiling boards both radiate outwards from the center. The floor and ceiling boards are custom cut in width and mitered to trace continuously and concentrically around the courtyard. Weathered metal straps on the ceiling further emphasize this geometry and act as a device to organize lighting and audiovisual equipment throughout the house. 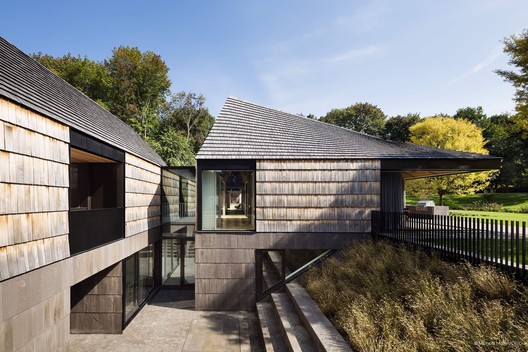