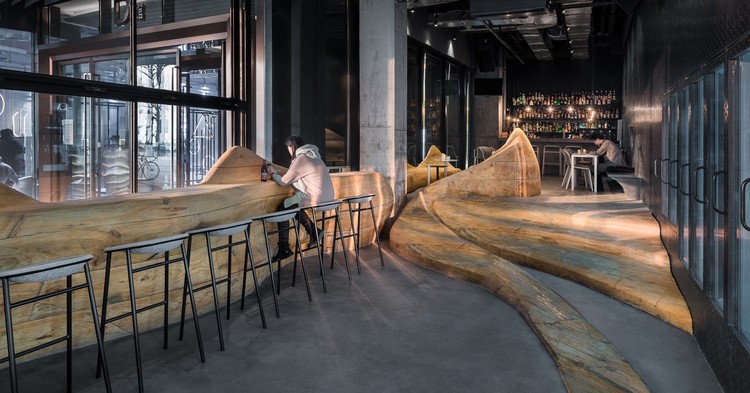 Text description provided by the architects. In recent years, our studio has been working on a series of renovation projects. This is a legacy phenomenon caused by the mass and fast production during the past 10-20 years in the construction industry, and it impels usto proactively reflect on and respond to the professional reality behind this phenomenon.

All of these renovation projects can be seen as simple replications of the Domino system in the horizontal dimension and repeated compositionsof such system in the vertical dimension. A word, a sentence, or even a piece of manifesto, does not become proper or rational even if it has been repeated thousands of times. That is why we make different attempts in each renovation project to respond to these existing and constantly repeated “errors” and “lack of quality”, experiment  with more enriched and more prototype-drivensolutions to renew the existing structure, and expect to generate completely new building systems and structural systems.

We call this series of renovation projects as “Anti-Domino”. The Anti-domino No. 02 Project being presented is the first completed one from this series.

How to create a response to integrate the outdoor environment (including the distant view of Yangtze River) with such a concrete structure within only two column spans and less than 100 square meters? This is the primary question we consider. It also includes the reason why the owner chooses this site for his pub, ----he wants to have all the people who like beer in Chongqing come here to enjoy the pleasing environment, as well as the nice and unique skyline of the Yuzhong peninsula from both indoor and outdoor perspectives.

People who arrive in Chongqing for the first time will feel excited when they see such distinctive geospatial features. However, it is regrettable to see all the new buildings in this city (including commercial, residential, urban complexes etc.) are the same type as the buildings in all other Chinese first-tier cities. The architectural forms do not respond to and respect the local topography, landscape and climate.

So we employ a set of new structural language in this project, to simulate the special mountainous space of Chongqing. The mountainous terrain is introduced into the restricted concrete space with integration of a more subtle scale of furniture. This amplifies the dimensional feeling of the space, and also introduces the more relaxed body gestures (sit, lie, squat, lean) of the Chongqing local people (as well as how a natural person in an old neighbourhood will behave) into such a scene of modern life.

This set of design can be seen as topography, landscape, or furniture design. It includes the guide of sight line at the entrance, spatial partitions, footrests of bar counter, small articles for stroking while drinking, and large wood sofa and so on. The whole model is made of pure solid wood and carved by computerized digital control machine. The model is designed on computer, then prefabricated in the factory and assembled on site, which this technique improves the completeness of the model and also saves the time of on-site work.

The solid wood will partly expand or contract with the effect of the local wet weather, and varied wood grains will emerge on the surface. We expect it will dehisce after one or two years and show a more natural effect of wood piling, just like the appealing scene in a warehouse of timber mill. People will also leave the signs of frequent use on the surface, which seems to implicitly suggest the changes of fermented beer in the barrel.

This project also provides a chance for us to rethink the megastructure such as super high-rise. As a critical reflection toward the Domino system, we find that the existing super high-rise design is only a repeated stack of the single layer structure, allowing limited connection between the layers. Moreover, the super high-rise is not only a closed structure inside, but aslo a lonely island in the city. It is like Narcissis, who only has self-worship, and refuses the possibility of any interaction.

So we use such a new topographical structure to replace the previous horizontal floor, and a completely new public space will be generated inside the super high-rise. It creates connection through the roof garden, top-level residential blocks, work units on the middle floors, and the commercial space on the ground floor. The efficiency of high-rise co-exists with the comfort of lower level, and landmark and openness reach a settlement. Such a picture, a real democratization of landmark-brimming era. 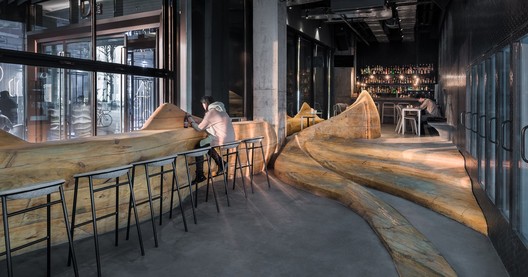