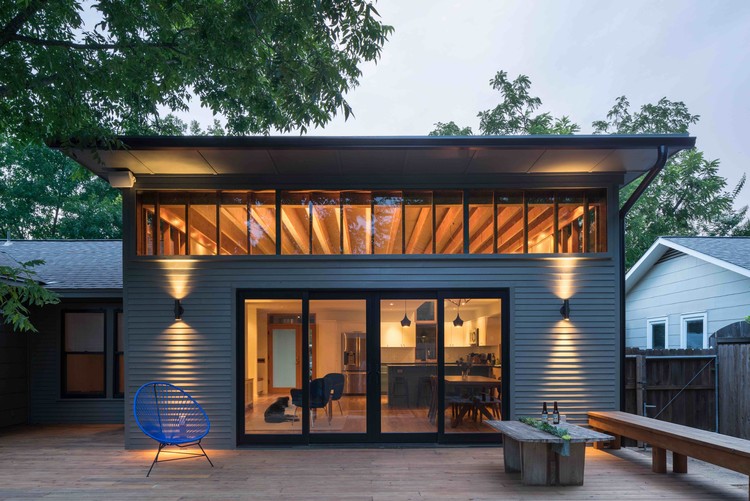 Text description provided by the architects. This typical Austin 1940’s bungalow was strategically remodeled to transform an arrangement of dark, low-ceilinged rooms into a single continuous space with kitchen, dining, and living areas. Custom clerestory windows provide indirect daylighting throughout the day, and a tall window slot in front of the kitchen sink frames a crape myrtle. Built-in cabinets maximize storage along both sides of the room.

Our intention was to work with the existing building typology, the modest post-war stick frame construction. Stick frame construction is the most common building system used in residential construction and its inherit beauty and elegance is often hidden, buried underneath sheetrock and other finish materials. For this project we wanted to reveal and work with the stick framing as a finished product and to allow it to shape the character of the interior space. The even distribution of load paths through the building form give the stick framing a light and delicate quality. We introduced a balloon framing technique to support the roof and placed a custom window unit on the outside of the framing. In doing so we eliminated the need for a large header and were also able to conceal the window stops and other glazing comments behind the continuous wooden balloon frame studs. This technique reduces the amount of components that are visible so that the simplicity of the framing is revealed.

For both the exposed wall and roof framing elements we chose standard No 1 Douglas Fir for the warm tone and lack of defects while still being standard framing lumber. These framing elements were also a fraction of the cost of furniture grade custom lumber that is typically used for exposed framing elements. We added a satin polyurethane finish to the exposed studs and joists to reflect the light through the clerestory. Another standard stick framing element that was exposed was the 3/4” AB plywood roof deck with the A side facing down. We added a pickling stain to the wood to lighten it and suppress the grain. The effect is a very light and reflective ceiling that has a warm and natural feeling. The roof framing was layered so that the exposed structural framing, visible from below, supported a secondary framing system above that from the cavity for the insulation which also concealed the fasteners used to attached the roofing.