Text description provided by the architects. Taringa Treehouse is a detached residential extension located in a backyard. It is both integrated and independent to the original house. The treehouse instigates a shift in occupation within the Site, reflecting an attitude of informality inspired by a significant tree and the peculiar territory it occupies.

Brisbane is a verdant, subtropical, suburban place. House lots are typically long and thin. Traditional timber and tin houses (Queenslanders) politely occupy the street edge and create largely unoccupied spaces at the rear. These ‘backyards’ tend to be overgrown, unruly spaces and are the domain of children and makeshift structures. The treehouse is devised as an invitation to visit and engage with this distinct yet typically unchartered territory.

The footprint is confined and placement careful to minimise displacement of valued landscape. The building generates a large courtyard between itself and the house, secures privacy to the side and rear neighbours and casts shade in the afternoon. The triangular plan is the considered response to the field of immediate adjacencies.

The long edge [hypotenuse] has been cut to accommodate the majestic tree and opens a broad north eastern face into the garden. The exaggerated weatherboard elevation has been designed to receive the shadow play of the tree. The short side contains the translucent stair nestled into the tree line. The western elevation catches the intense heat and light of the day and is glimpsed from the street. Draped in metallic cladding, the treehouse is revealed to the neighbourhood as an unexpected urban artefact embedded in the greenery. The treehouse presents no formal elevation back to the original house. Only the 'thin edge of the wedge' is present. The intention was not to fill the backyard but retain the natural aspect and vacancy.

The building is designed as a set of informal spaces, walls sliding open to embrace and borrow from the landscape. The program is un-prescribed, downstairs is a platform with a veranda edge, there is a climbing wall, upstairs is a loft. The scale of the building is proportioned to the tree. The structure is stretched and elongated to reach the low branches. Occupants are scaled by the internal volumes, at some moments swelling relative to the spaces other times shrinking within them. Movement is centrifugal, along its 3 sides, sling-shooting the occupants from the ground up into the canopy. The expressed structure subtly reinforcing the shifts in orientation and geometry along the journey.

Many aspects of the Treehouse are informed not from local domestic architecture but rather the playful language and sensibilities of children’s cubby houses which traditionally inhabit this terrain. Whilst refined and keenly executed, the treehouse reflects upon the assemblage of eclectic materials and textures of these naïve structures. More particularly their ability to collect experiences of place and solicit memories. 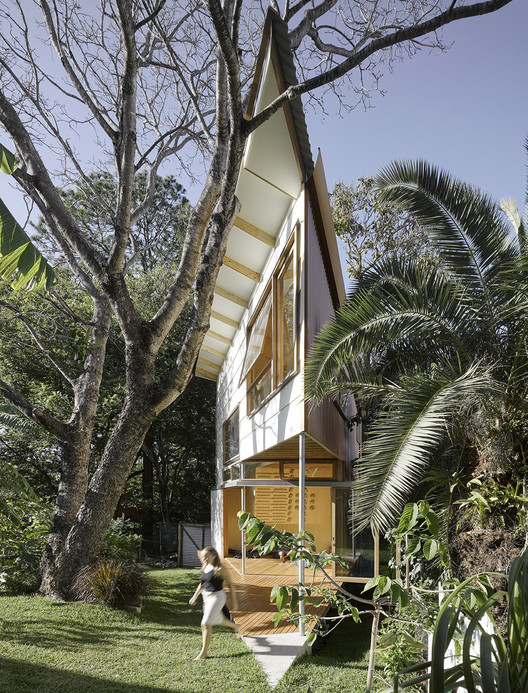