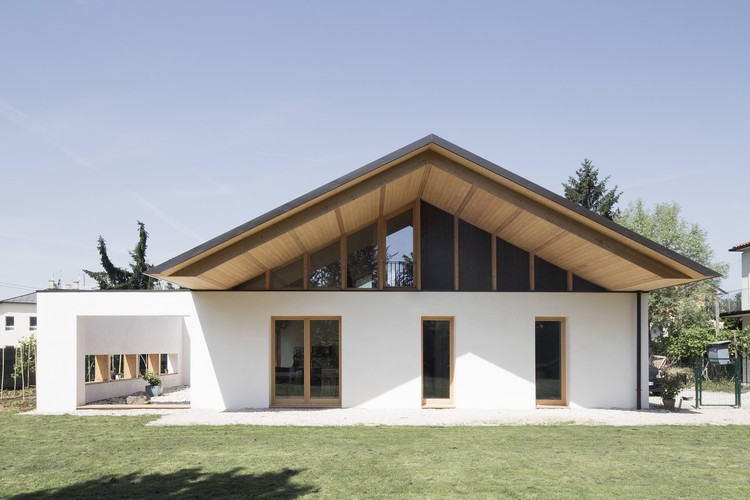 Text description provided by the architects. The project reveals an idea of architecture based on archetypes as a trend-proof horizon. The archetype for home is shelter. You can make a shelter with a fence, a wall, a canopy; but you still can’t get a house.

Two elements, a roof and a wall, define the domestic space. Starting from the house icon we tried to rotate the roof. This single move added three more elements: a patio and two porches.

Design process is fundamentally rooted on the analysis of climate and the contexts. Information on ground temperature during the year; wind’s main direction and strength; sun shading over the seasons and presence of water (rain and aquifer) affects the design mindset.

Context (both at the urban scale and the neighbour) and site layout were studied in order to control external factors.

The main goals that the clients wanted to achieve were: privacy of their home; specific functions related to their habits such as a big porch and a playroom.

We designed a compact ground floor on the golden section since we wanted a figure as much stable as possible. The roof is conceived like a folded sheet of paper and it is superimposed on the mass of the white wall.

Living room faces south and looks to a patio. Rooms are in the northern part. An attic floor hosts a playroom and a guest room.

The patio is a stone garden that hosts a non-stop natural light show. Here a water basin lies underneath a gravel floor supported by a steel structure.

Interiors are in direct visual and physical contact with the gardens. The superimposition effect its clear also from inside.

During summer solstice the big east-west oriented roof shades over the main outdoor living areas and windows. In winter time the sun enters inside and lights the patio. Wide openings facing south let the sun fulfil the living even in december.

Airflow design and the good transpiration of a straw-bale wall with lime render help to avoid tools and technology.

The basin and the foundations are made in reinforced concrete. Ground floor insulation is a layer of recycled crushed foam-glass on a geotextile membrane laid directly on subsoil to avoid rising damp.

In this building we tried to reduce constructive solution to the very few that the project needed. As a single architectural entity the perimeter wall is entirely made with straw-bales. We would like to get the continuity of the perimeter and prove the versatility of the material if carefully protected.

The main wooden structure (for both the perimeter wall and the roof) is filled up with straw-bales to maximise the level of insulation. A 30mm lime render finished with silicate paint lets the whole wall transpires.

The straw wall has also an high level of fire resistance, the same thickness of a C.A. wall stands less.