Polish architect, designer, and sculptor Oskar Zieta has unveiled his latest project: the arched NAWA pavilion on an island in Wroclaw, Poland. The pavilion forms part of the European Capital of Culture celebrations following the theme of “Metamorphoses of Culture” and was unveiled in June. The lightweight steel elements that make up the parametrically designed sculpture are made in a unique method called FiDU, a metal-inflating process created by Zieta during his PhD studies in ETH Zurich. Though Zieta has used FiDU successfully for various products (many exhibited in the Salone del Mobile in Milan), the NAWA Pavillion is the first project of this size to use the technology entirely, and is thus coined as “a manifesto of FiDU." 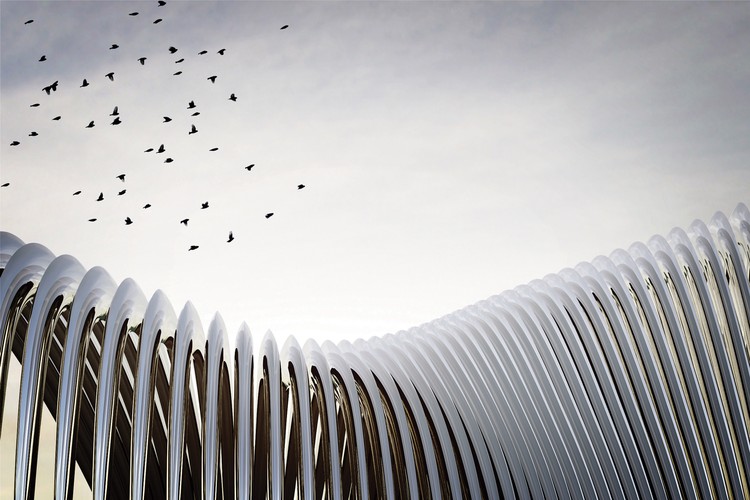 The sculptural pavilion is designed with the revitalization of Wroclaw’s Dailowa Island in mind, “returning it to the dwellers of Wroclaw.”  The sculpture, along with an additional 7500 new plants to be planted on the island will create “a consistent organic unity, emerging naturally from the river.” (Zieta)

How to stabilize something as thin as a sheet of paper? We puncture. We bend. We corrugate. We inflate. We research and consult innovative production processes - Zieta.

Thanks to our amazing team and all people involved unveiling of NAWA is getting closer with every day! #zieta #zietaprozessdesign #NAWA #design #art #wroclaw #wroclove

FiDU has three main steps: metal elements are lasercut forming a 2D template, their edges are welded together and finally compressed air is pumped through the object, inflating it into its final 3D form. The result? A lightweight, durable metal component that is also stable through the compressed air expanding it. Metal objects made using FiDU can be used as a piece of furniture to an architectural element in construction. Zieta describes the possibilities of FiDU extending beyond the architecture and design realm, stating the car industry or even applications in space as examples of FiDU’s potential.

The “imperfect” nature of the hollow forms generated through inflating the metal is intentional. Inspired by curving forms in nature, Zieta deliberately allowed for natural dents and creases to appear on the final product instead of a perfectly inflated shape, which would not occur in nature.

A few kilobytes of memory are used in the production files that generate the inflation through digital fabrication processes, whereas achieving a “perfect” shape each time would consume gigabytes of processing capacity. The efficiency is a “controlled loss of control” described by Zieta – as the metal “decides” its final form.

Working with FiDU technology is similar to carving clay – internal pressure causes the metal to change shape on its own and exhibit the natural result of the distortion – Oskar Zieta.

Parametric software Grasshopper was used to model each arched element according to its optimal size, weight and adaptation to the terrain of the ground. The templates were then cut and welded with up to 2km of steel weld to connect the 2D faces together.

A team of 23 people including Zieta were tasked with the construction and assembly of the pavillion, which took approximately 700 hours of work to create from start to finish. 52 tons of steel was used to create the 35 arches forming the NAWA pavillion, with the largest beam weighing up to 450kg and rising to a height of 7m. Though the weight seems immense, all the steel beams are hollow and lightweight as can be, with a mere thickness of 2mm. In total it took approximately 1 million cubic meters of compressed air to fill the arches and transform the 2D template into a 3D structure of polished steel.

In order to minimize assembly time on site the majority of the production was done in a shipyard, allowing for a large space and access to the Odra River. The arches were carried towards the site on barges, where passers by and locals could witness their journey. They were then assembled on site atop Dailowa Island, where the pavillion now stands.

The sculpture does not alter the wild character of the island. Quite the contrary: it amplifies the nature’s presence. Polished steel surface is reflecting its green surroundings, the river and historic architecture. Depending on the weather and time of the day, the sculpture looks differently each time – Oskar Zieta. 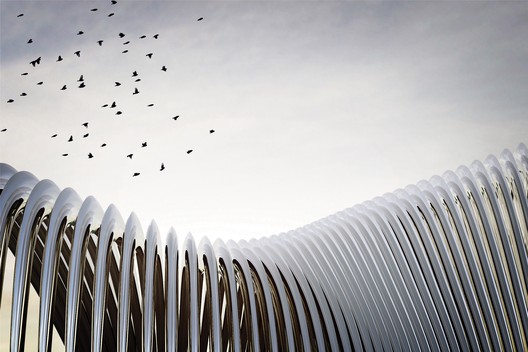