Facebook has announced plans for a new mixed-use neighborhood adjoining their existing headquarters in Menlo Park, California to be led by the New York office of OMA and Partner Shohei Shigematsu. Known as Willow Campus, the campus masterplan seeks to further invest in Facebook’s home community, joining the original campus designed by Frank Gehry.

“It’s exciting to collaborate with Facebook, whose innovation in networking and social media extends to urban ambitions for connectivity in the Bay Area,” commented Shigematsu. “The Willow Campus masterplan creates a sense of place with diverse programming that responds to the needs of the Menlo Park community. The site has the potential to impact the future of regional transportation, housing, and environment.”

The project will comprise a full range of community building typologies, from grocery stores to parks to housing. Early plans call for the construction of 1,500 new residential units, 15% of which will be offered at below market rates. Facebook hopes that including all of the needs of a community will help to strengthen the company’s ties to Menlo Park, as well as reduce traffic impacts typically caused by growth.

“Working with the community, our goal for the Willow Campus is to create an integrated, mixed-use village that will provide much needed services, housing and transit solutions as well as office space. Part of our vision is to create a neighborhood center that provides long-needed community services. We plan to build 125,000 square feet of new retail space, including a grocery store, pharmacy and additional community-facing retail,” said Facebook’s VP of Global Faculties and Real Estate, John Tenanes. 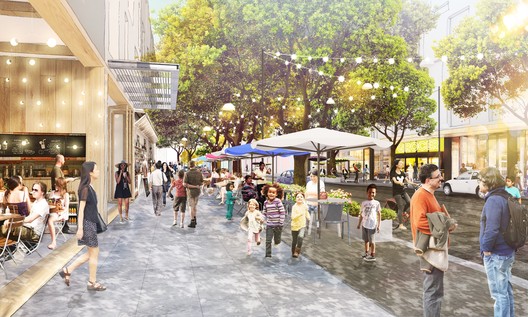