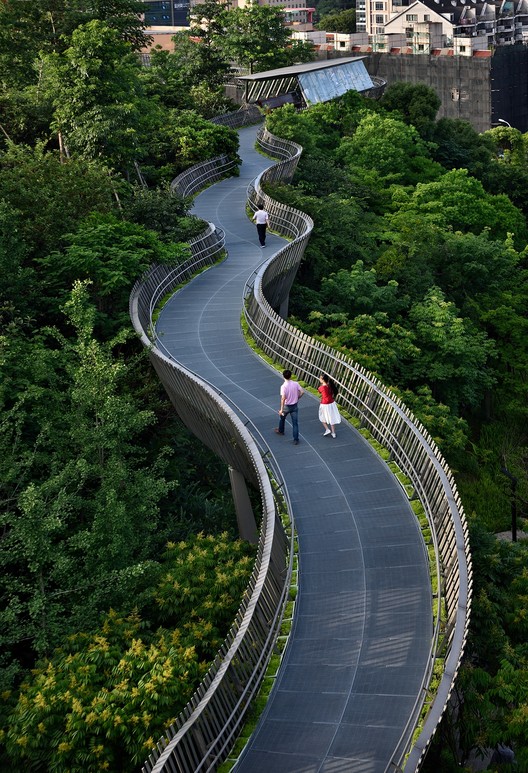 Text description provided by the architects. A first-of-its kind elevated steel pedestrian walkway system weaving through forested areas in China, Fuzhou Forest Walkway spans over 6.3 kilometres from end to end, threading through the full breadth of Jinniushan and covers about 19 kilometres along its winding path. A signature urban connector network that provides public accessibility to indigenous hinterland stretching north- east of Minjiang, Fudao signifies an awakened consciousness to improve lives of city dwellers by bringing nature within closer reach.

One of the greenest cities in China, Fuzhou is capital of Fujian province, sometimes referred to as Rongcheng or ‘banyan city’, famed for the numerous banyan trees that line its streets. Together with mountainous geography and picturesque man-made lakes, the charm of Fuzhou’s natural beauty is undisputed. Nonetheless, accelerated urban growth has diminished the coverage of forested zones – Jinniushan is one of the larger green lungs situated within downtown.

Hemmed in by military camps and a few burial sites, many parts of Jinniushan have been inaccessible to the general public and left largely untouched. As part of the implementation of Fudao, environmental enhancement works include construction of a modern columbarium complex for rehousing the exhumed graves, rehabilitation of an abandoned quarry site for a new visitor’s centre and conversion of an existing bus depot into a main entry point, Xikezhan .

There are a total of 10 entrances leading into the walkway network, each celebrated as a bold intervention into the existing urban grain. At Xikezhan, the existing bus depot will be transformed into a food and beverage enclave, its accessible landscaped roof deck linking the adjoining “Cliff walk”, breath- taking cantilevered step platforms wedged into an existing cliff face about 20 storeys tall.

For another entrance situated at the open plaza of existing Jinniushan indoor sports hall, a stately spiral ramp measuring 24 metres across its diameter is introduced, announcing the transition from flat urban plain to hilly forested terrain. At the northern tip, connectivity to Meifengshan Park has expanded the design brief to include master planning for the future commercial hub encapsulating approximately 30,000 square meters of gross floor area.

Conveniences such as rest shelters, viewing decks, observation towers and teahouses with washroom amenities are interspersed throughout the elevated walkways, laid at a gentle gradient not exceeding 1:16 for barrier- free accessibility. An intelligent walkway network equipped with WIFI connectivity, touch-screen information boards and visitor traffic monitors, Fudao has the potential to set a new national benchmark for eco-routes.

Comprising 8 basic deck components that can be stitched together in various permutations, the walkway network is an all-terrain modular system with the capability of negotiating undulating topography. Efficient design allows for a long span of 14.4 metres between supporting columns, minimizing the construction footprint. This is an important consideration for Fuzhou municipal officials, whom has accorded top priority to the conservation of existing ecology. Use of steel grating for the walkway decks serves to bring natural light down to the ground plane, encouraging low-lying plants to thrive.

To ensure seamless connectivity, an overhead bridge straddling across an existing vehicular arterial Honggan Road has been designed, a stunning icon with a column-free span of over 72 metres. The raked profile of parapet screens serves to increase the bridge structure’s porosity, to better withstand high wind loads in the vicinity. Engaging the unique character of the existing site context, various segments of the walkway network add up to an enduring expressiveness.

The demonstrative stretch of Fudao – stretching 1.2 kilometres, including the entrance spiral ramp next to Jinniushan indoor sports hall – has been newly completed and is well received by municipal leaders. While the demonstrative stretch will soon be opened to public as a preview of the overall master plan in the pipeline, works will be continuing for the rest of Fudao, targeting substantial completion in another year’s time.

The immense scale of the project has been an eye-opener and the team at LOOK Architects has found the design challenges involved most gratifying to surmount. Embracing the philosophy of bettering lives through design, the team has aspired to spread this optimism beyond our shores, and to create a positive impact on future development of the city of Fuzhou. 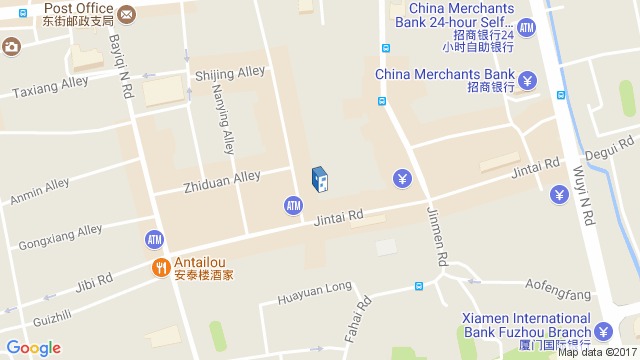