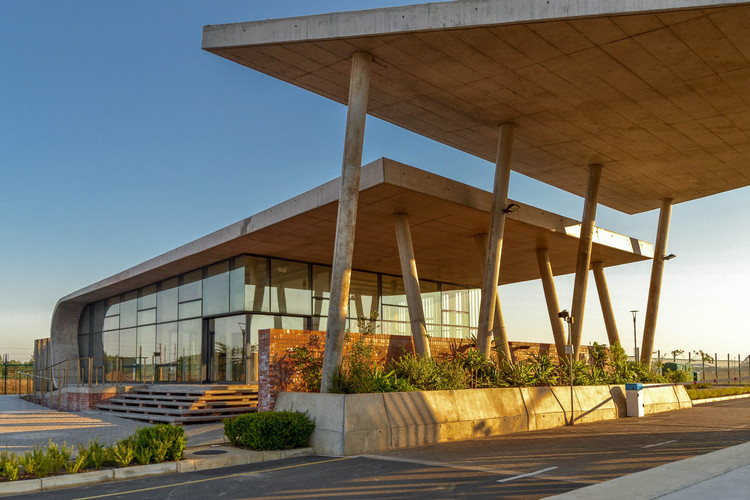 Text description provided by the architects. Commissioned by the provincial KwaZulu-Natal government as its business entity, the Richards Bay Industrial Development Zone is a world class, fully serviced industrial estate located on the north-eastern coast of South Africa. The Industrial estate is a special economic zone set up to attract export orientated investment. This estate is ideally located, boosting prime rail and road access; it is also linked to the deep water port of Richards Bay. The Richards Bay Industrial Development Zone is envisioned to be a trade portal to the world.

The brief required a landmark gateway into the industrial estate as a bold statement of arrival by the Richards Bay Industrial Development Zone. The landmark gateway needed to be both environmentally sensitive and architecturally bold. Our initial proposal was a light weight Saligna timber ‘box’ structure with clear sheeting which was dismissed as not being architecturally bold enough.

The resulting fluid concrete form is a not so subtle reference to the municipality’s animal, the fish eagle, shown in the municipality’s emblem with its wings wide open gliding towards its next meal. The fluid concrete form could also perhaps be interpreted as a subconscious reference to the ocean 1km away on which ships sail into the port bringing in raw products like bauxite for processing in the industrial estate and leaving with processed/formed aluminum. The building’s form is a counter-point to the rigid, orthogonal geometry of the typical industrial steel shed typology which will be the predominant form within the estate.

Raising the building by 1m off the ground, not only allowed for a much more pronounced entrance and reception but also allowed for air vents in the slab. The slab vents are part of an intricate passive cooling system. This passive system includes a planted courtyard which acts as the building’s thermal chimney. The courtyard also serves the purpose of being the building’s organizational structure; the office, boardroom and reception are all physically and visually connected to it.

The long term sustainability of the building was extensively considered which in turn, informed and affected the form. For instance, all the roofs were designed to collect rainwater into the pond. The collected rainwater is then cleaned and pumped to underground water tanks. The water tanks are used to provide water for the toilets and garden. The Solar panels together with the diesel generator are primarily used as the back system for the building but could, if needed keep the building off the grid for up to 6 days. 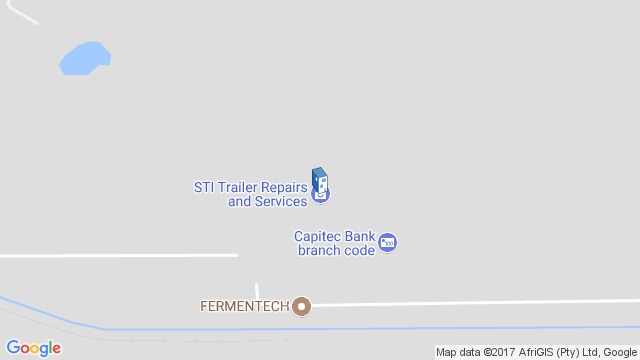 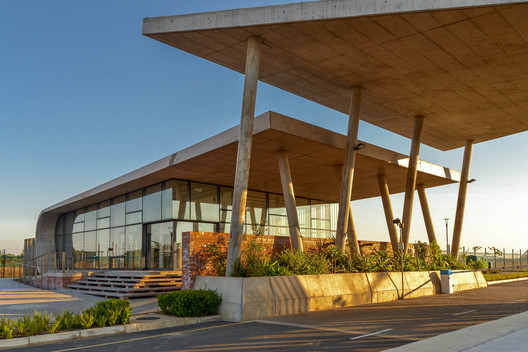