Save
9 Weird and Wonderful Architectural "Ducks"
Share
Or
Copy

They exist for a reason.

Coined by Robert Venturi and Denise Scott Brown in Learning from Las Vegas, “Ducks” are buildings that project their meaning in a literal way [1]. No architectural metaphors here - they are exactly what they look like. Many emerged alongside interstate highways, a lone doughnut or dinosaur punctuating the road trip across America. Places like Las Vegas and Macau have built their identity in the kitsch and literal language of architecture – with the duck a strong contributor. Though they get relegated to one of the weird forays of the postmodern era, ducks still make current-day appearances (like the Chicago Apple Store’s recent Macbook roof). Are they fun, kitschy, or just plain ugly? Love them or hate them, ducks have a light-hearted presence in our architectural history. Below are 9 weird and wonderful examples of buildings that make no apologies for being exactly what they are: 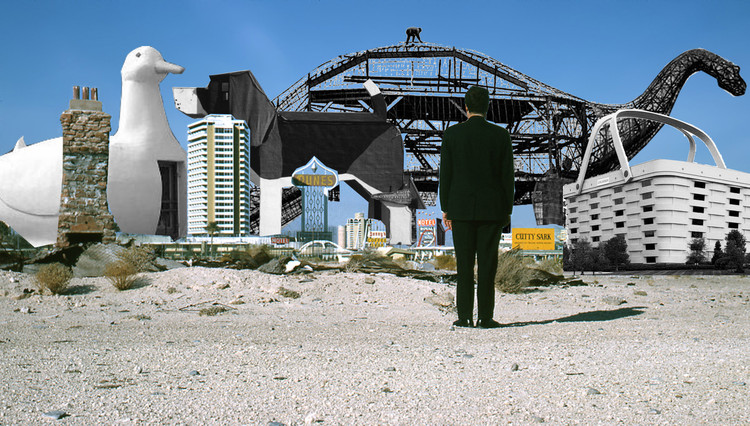 The one that started it all, Robert Venturi coined the architectural term “duck” from this precedent in his 1972 book Learning from Las Vegas. Built in 1931 by duck farmer Martin Mauer, the structure was designed to sell (you guessed it) ducks and eggs, with its unusual shape and prime location attracting many customers. Initially built along a busy street in Riverhead NY, the duck enjoyed a nomadic life moving several times before settling 6km down to the small town of Flanders, Modelled after a Pekin duck, the roly-poly proportioned building was built almost entirely from wire mesh and concrete to make room for a gift store. Apart from being immortalized through Venturi’s writing, the Big Duck made architectural history by landing a spot on the USA’s National Register of Historic Places in 2008.

The two-story, 420 square meter house was originally built in 2007 for Sim Jae-Duck (fittingly named), former congressman and mayor of the Suwon province of South Korea. Nicknamed “Mr. Toilet” for his career-defining pursuit, Sim was devoted to improving the state of restrooms in the country. “The toilet is also a central living place that possesses culture," he said at an assembly. The house is a literal monument to Sim’s eccentric quest of beautifying the restroom – with stairways following the movement of pipes and a painted steel exterior alluding to the white ceramics used in toilets. After Sim’s death in 2009, the private home was transformed into a toilet museum, with exhibitions, collections, and activities dedicated to funding public bathrooms in developing countries. Looking for the restroom? The building has four – one even featuring floor-to-ceiling glass that turns opaque at the push of a button.

Shoe salesman Mahlon Haines reportedly approached the building’s architect with a boot and said: “build me a house like this”. The Shoe House was born; built by as a form of advertising for Haines’ business in 1948. The 25 foot-tall building is 5 stories high, with upper floors previously rented out to couples and now hosts building tours. The house is planned with its living room at the toe, the kitchen at the heel and living quarters running up the ankle of the boot. An ice-cream shop is also located in the shoe’s instep.

The two-bedroom B&B was designed and built by artists Dennis Sullivan & Frances Conklin, opening in 2003 as the world’s largest beagle-shaped building. With a canine-themed interior, the building is a quirky addition to America’s “roadside architecture” – popular in the early days of automobile vacation trips that formed a deep-rooted part of America’s culture (Many of these overlaps with the postmodern “ducks” that Venturi mentions). The beagle building gets quirkier, also hosting a museum for chainsaw artists (think painted timber sculptures of different dogs).

Officially the erected as the world’s largest teapot in 2010, the museum rises to a height of 78 meters with a diameter that stretches as wide as 24 meters. A building entirely devoted to teapots, the 5,000-plus square foot museum is one of the most “duck-like” buildings both in design and program, taking literally to the next level. Meitan possesses a rich history surrounding tea - known as the hometown of Chinese green tea. With China deciding to steer away from “weird buildings” we’re glad to see this quirky addition make it in time.

Not deconstructivist, but still curvy – this is definitely one of the architect’s weirder works. Frank Gehry designed these binoculars as an entrance to his more Gehry-like Chiat/Day commercial building (behind) in 2001. The postmodern-style building is known for its unusual mishmash of different architectural styles and materials. Ten years later, Google announced they would be leasing the building as part of their Los Angeles expansion – the binoculars now serving as an entryway to their Venice offices.

Designed and built in 2011 by artist Tomi Ungerer and architect Ayla Suzan Yöndel, this adorable kindergarten goes beyond metaphor in its details. Clad in concrete and metal, the two-floor building allows natural light to flood inside through its round window “eyes”. Though the idea of entering through the mouth of a giant cat and having class in its belly sounds creepy - an endearing façade, green “fur” roof and tail-shaped slide ensure the building stays true to its playful spirit.

Started in the 1960s, the giant dinosaurs were intended as roadside attractions by the sculptor Claude K. Bell (see 4) to attract customers to his Wheel Inn Restaurant (now closed). The first - named “Dinny” was built over a period of 11 years by 1975, with “Mr-Rex” added later in 1981. Bell created Dinny out of salvaged material from the neighboring highway: with a steel framework and an expanded metal grid forming its shape, before being covered in coats of “shotcerete” spray concrete. A wooly mammoth was also intended to be built but was never realized. After Bell’s death in 1988, the property was sold and is now used to host a creationist museum and gift shop.

Along with the Big Duck, the Longaberger basket building is a fixture in novelty architecture. Built as the literal embodiment of the company’s best-selling product, the 180,000 square foot building opened in 1997. The company’s founder Dave Longaberger had originally wanted all companies to follow a basket-like form, but only the headquarters was completed prior to his death. Nowadays has been tragically left unoccupied, with Longaberger ceasing to pay property taxes for the property in 2014. Sadly the famed basket has been left empty and languishing on the property market, with no potential buyers. A long and complicated foreclosure process is underway but so far the building is still left standing as a relic to those who still wish to pay a visit. 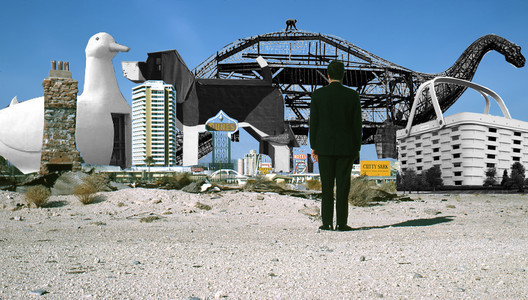