Save
Hammam and Apartements in Patumbah-Park / Miller & Maranta 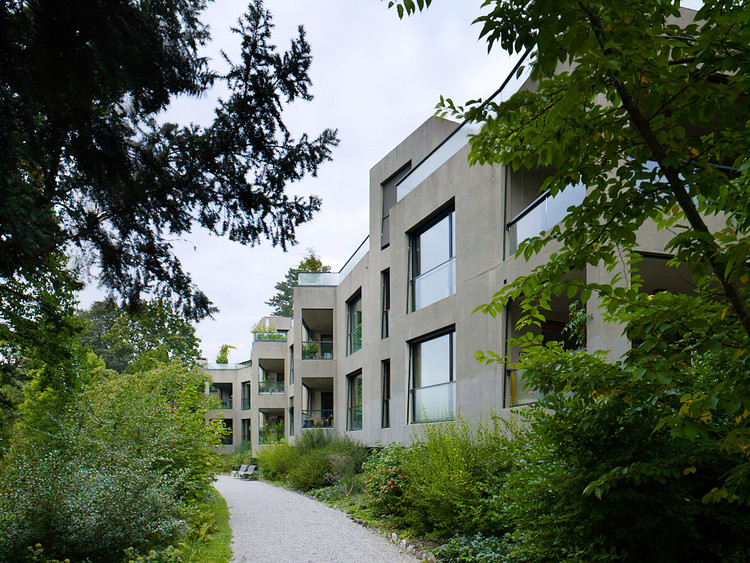 Architecture
Villa Patumbah was built in 1883-1885 by Chiodera & Tschudy for Carl Fürchtegott Grob. The architectural design, with lush stylistic motifs, reflects the material wealth of the builder and his memories of extensive travels and business success in Southeast Asia. In 1929, the plot was divided into northern and southern sections by selling the lake-facing site. The present development concept envisages preserving the spatial depth of the historical park as much as possible, thereby offsetting the loss of historical substance and content. Along the park edges, two irregularly cut volumes are integrated into the park landscape by large incisions and restrained colors and material.

Mühlebachstrasse Site
The long-stretched building is used in a variety of ways: it contains terraced-type housing, and a hammam section including a work area and bazaar. Seven of the ten apartments have their own entrance on the street and extend up over three to four floors. By interweaving the residential units, the inhabitants of the multilaterally-illuminated living rooms benefit from the special situation at the edge of a park. As a volumetrically differentiated building volume, the multi-storey hammam completes the development to the south. The mass, opened only through mashrabiya, relates to oriental models.

Introverted and protected from view, the interior is separated from the outer world. The interior spaces are divided according to the sequence of the bathing ritual: pre-warming, warm, hot and resting rooms, as well as massage spaces and a roof terrace with a view of the park.

The structure consists of lightly-reinforced concrete walls and slabs. The concrete walls are load-bearing panels, acting as beams, and, together with the floor slabs, form a monolithic overall support system for accommodating the large spans and cantilevers. The outer walls are composed of interior insulation and visibly exposed concrete surfaces on the exterior. The light color design was achieved with a mineral glaze, which is structured by a sponge technique. A mashrabiya, made from prefabricated concrete elements, accompanying the windows and terraces, alludes to the particular program contained within the building and integrates the project into the environment embellished by Fin de Siècle architecture.

The building was designed and built according to ecological building principles. Due to the necessity of high temperature flow required for the hammam, a pellet-heater was chosen to be used in all areas.

Zollikerstrasse Site
Along the Zollikerstrasse, marked by stone retaining walls and shady plants, there are eighteen large apartments, each organized on a single storey. The unusual building depth of almost thirty meters is overcome by generous, differently zoned floor plans, reminiscent of bourgeois city houses from the last century. The cuts, forming light-wells on the side of Zollikerstrasse, divide the volume of the building along the street. A strong relation to the park is achieved through spacious, open-plan living areas with loggias.

The building envelope is constructed as an exposed concrete façade, separated from the building by thermal technology. The wall panels, integrated into the cores in the longitudinal and transverse direction of the building, ensure the stability of the building against wind and earthquake forces. These stabilizing cores are in turn fixed via their connections with the lower floor plates.

The surfaces of the facades were sandblasted and painted with a two-color applied mineral glaze. The haptics of the treated concrete thus remain visible. Due to the two-color application of the glaze, the expression of the building defies a clearly defined aspect, thereby aiding in its integrattion within a diverse environment.

The building’s temperature is regulated with a geothermal heat pump and received a Minergie certificate thanks to the optimally insulated building envelope and balanced ventilation. Ecological principles were emphasized in the design. 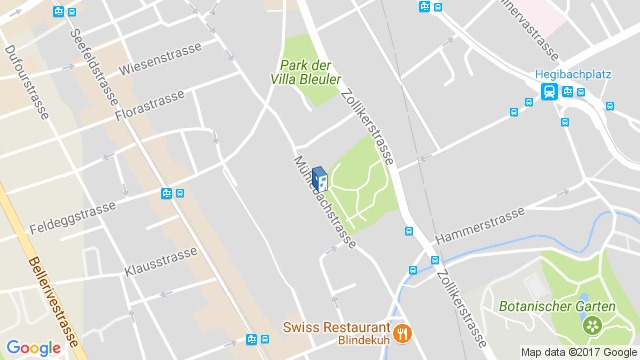