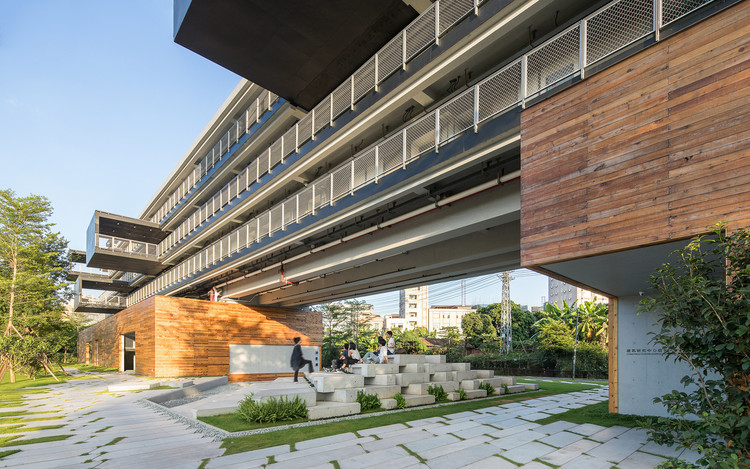 Text description provided by the architects. Collectivism had been one of the core spirits that motivated contemporary China’s modernisation, despite its relation with politically mandatory. The current social condition of fragmentation and individualisation caused by comprehensive, rapid urbanisation has seemingly diluted that former ideology.

This new staff dorm-building gave the architect a unique opportunity to construct a new collectivist form of living in Vanke’s Song Shan Hu Building Industrialization Research Centre. The 96-by-30-meter rectangular building site locates at the south-east corner of the centre, neighbouring another type of collectivist dwelling form, the primitive urban fabric evolved from former villages, lying outside the site boundary. The design task was to building a congregate dormitory to offer mainly weekday living studio to 155 staff, from security guards to technical specialists working in the research centre. The dorm building includes standard dormitory rooms, public dining spaces, gymnasium, library and other necessary facilities. Application of Vanke’s prefab reinforced concrete frame system, as well as a series of related new eco-building technology to this building is one of the basic demands from Vanke. The completed building contains 5 floors, on a 89.2 metre (east-west) by 9.1 metre (north-south) footprint.

The volume of the basic living unit limits in a standard module of 3.6Mx7.2Mx2.95M defined by the prefab structural system. There are three interior types, single room, twin room and 4-bed room. The total 55 living units are constructed in 3-floor volume, named Habita. The south facade of Habita is constituted by prefab private balconies for all units, while 5 big open steel boxes, public living spaces on different floors, are hung on the north facade, over-looking the entire research centre site. Public facilities are formulated into an L-shape timber volume, the Mount, which grows from the ground level to public dining room on the top. “Mount” is not only a metaphor. A climbing wall combined with Vanke’s green-wall is built directly on its east facade. The Mount volume discontinues on the ground floor, leaving a 24 metres’ shaded open space. A small hill, stacked with prefab concrete blocks, grows from the landscaping ground and creates an informal outdoor theatre in the covered space. The part of ground Mount volume on the west side contains the library and gymnasium. Between its roof and the Habita volume is a quiet recreational space. Staircases, elevator, corridors and bridges circulate the whole building into a vertical micro-community.

The collectivism here becomes a vivid and spontaneous gathering, initiated from simple social and architectural concept. 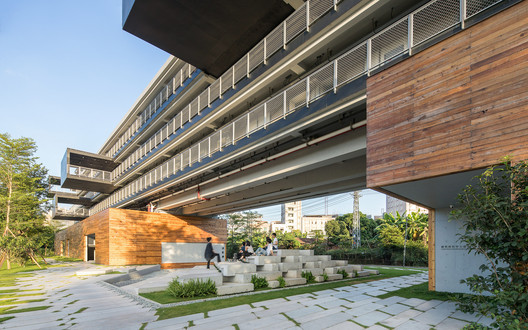