Danish practice 3XN Architects has revealed design plans for what will be the world’s largest fish market in Sydney, Australia. Selected from a submission pool of more than 60 international design studios, 3XN’s design will relocate the existing Syndey Fish Market from its location in Pyrmont to a nearby wharf in Blackwattle Bay on Bridge Road in Glebe, creating a new food and dining destination on the Sydney inner harbor.

“Sydney Fish Market is a beloved institution among Sydneysiders, Australians and international visitors,” said Sydney Fish Market General Manager Bryan Skepper. “Therefore, it was integral to select a design team that will modernise and improve the site whilst recognising its longstanding heritage and retaining the authentic experience that attracts customers and visitors."

“Danish designers delivered the iconic Sydney Opera House and we have great expectations that the Danes will deliver again with an iconic new Sydney Fish Market. We’re inspired by 3XN’s credentials and are excited to work with them to see our redevelopment vision come to life.”

The architects focused on community building and placemaking as core principles, resulting in a scheme described by UrbanGrowth NSW Head of Projects Portfolio, Barry Mann, as “dynamic, sustainable, and sympathetic to the local area.”

“We are incredibly excited to be working with UrbanGrowth NSW and Sydney Fish Market to create not just an authentic fish market, but an iconic destination for Australia,” said 3XN Architects Creative Director and Founding Partner Kim Herforth Nielsen.

“We place people at the centre of any architectural response, with an emphasis on place-making to foster a strong sense of community.”

The new fish market project is estimated to cost over $250 million – an amount the NSW government believes “will be offset by [the] mixed-use development on the site of the present fish market and car park.”

More detailed draft designs of the fish market will be revealed later this year for public comment. Construction is slated to begin in late 2018.

Update: 3XN's Quay Quarter Sydney has received final approval. The article below was originally published September 25, 2014, after the practice won the commission. New interior images have been added to the gallery. has won an international competition to design the "50 Bridge Street" tower and masterplan for the Quay Quarter Sydney (QQS) precinct. 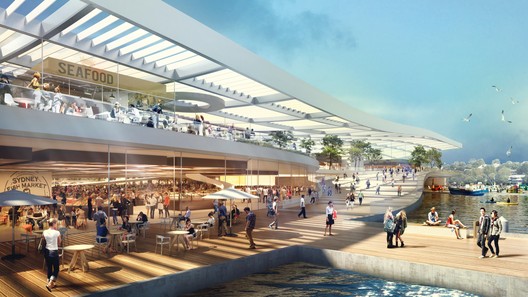