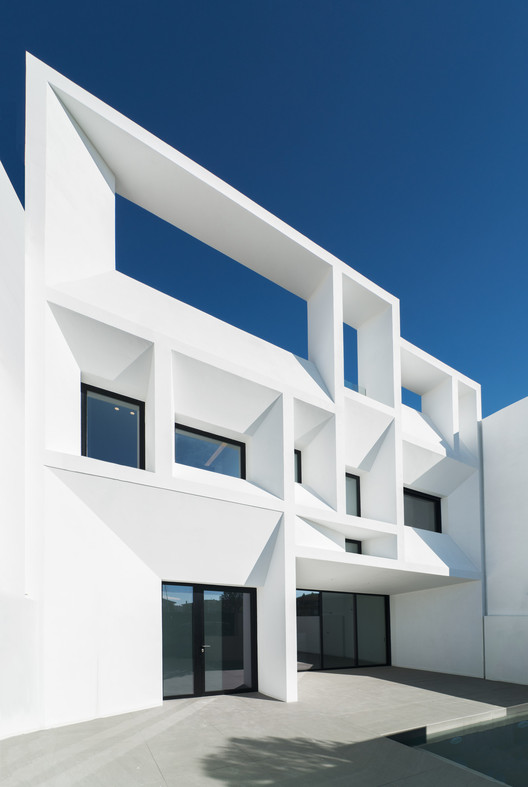 Text description provided by the architects. Housing located in a residential area near Valencia. It is a project in section (and in elevation), that provides an interesting game of different interior heights, communicated by a light and sculptural staircase of steel and oak that articulates the house. On the outside, the variety of heights moves to the elevation, where the geometric sincerity gives rise to a powerful Brise Soleil that opens the house to the long views of the west, while it protects of the solar radiation. Light and shadow controlled from the outside to the interior.

The three floors of the house correspond to different uses, being located the day area on the ground floor, the night area on the first floor, and leisure uses on the second floor. The day zone, is developed as an open space around a staircase and central furniture completely permeable. The concealable sliding door systems, aluminum and glass in the exterior, and wood indoors, allow a total use of the plot in the longitudinal direction, being linked from pool to the interior courtyard.

In the same way it happens in section, the dining area opens in double height to the space of circulation, bookstore and studio of first plant, and in triple height through the stairs to the polyvalent zone of second plant. This allows the entrance of natural light captured from the first floor to the core of the house.

The first floor integrates the night area, with three bedrooms which are also organized around the staircase and central furniture. And on the second floor, a living room and another multipurpose space, which give access to both front and rear terraces.

From the street, the black deployé, gives the necessary privacy to the outside pool area, while in contrast cuts the superior look towards the white Brise Soleil of the main elevation, facing south-west. The facade is folded in trapezoidal inclined planes, which with a total depth of one meter, generate the necessary shadow over the large glazed hollows, apparently random, but which respond in size, shape and position to the requirement of each interior space they serve. Pure and subtle geometry at the service of the interior needs.

The exterior pavement, even from the pool, has continuity in the interior, eliminating any internal-external physical barrier, which allows to extend the interior to the limits of the plot. It is materialized by gray porcelain stoneware large format stone, which generates an apparent total continuity in the pavement.

The natural light, coming from the east and west façades, reaches the interior of the house, causing double and triple entries of natural illumination to each interior point. Similarly, the sought-after shadow is the protagonist of the front facade.

It is materialized by gray porcelain stoneware large format stone, which generates an apparent total continuity in the pavement.

The purity of white geometry and natural light, are compensated in the human scale with natural oak, tangible in the staircase and central furniture. 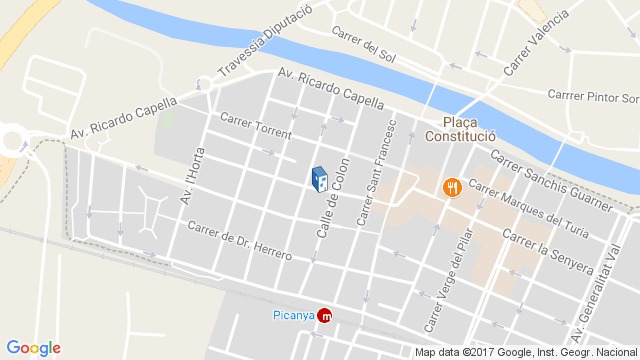 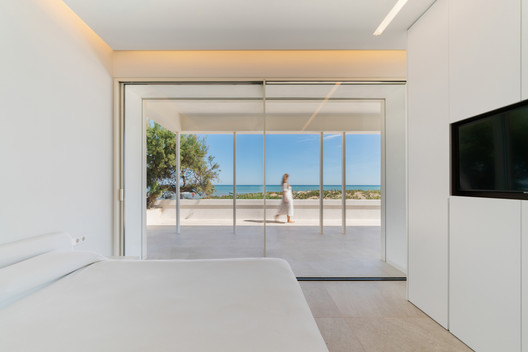