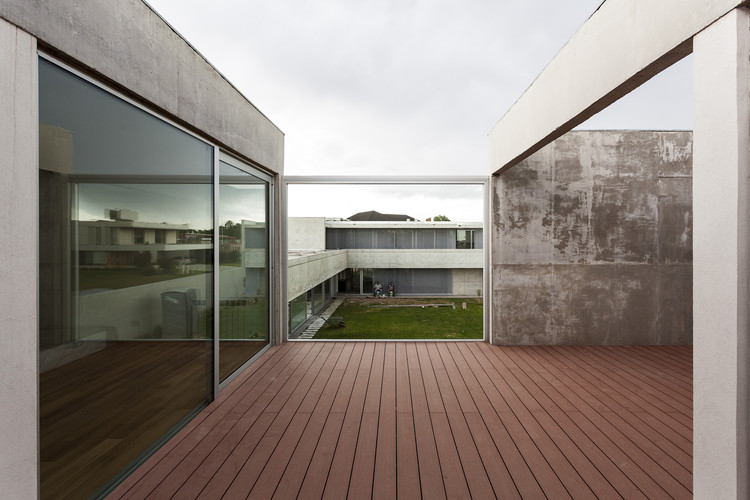 Text description provided by the architects. San Sebastián is a gated community located in Funes where we arrived with the project of two houses, at the beginning of its development.

The lack of adjacent constructions and forestation shows us limited references where the land still merges the sky and the appropriation of the pampas is noticeable only because of the car circulation, the technical areas of the facilities and the boundary markers between the lands.

Two brothers, together with their families, set out on an exodus to this type of residential area due to the deterioration of the quality of life in the neighborhoods of the City of Rosario, because of the big insecurity they sense.

The assignment anticipates that the houses would be planned with a difference of a couple of months between them, being the DL house the first one to be designed.

This construction looks for the replication and recovery of the current way of living of the owners, typical of urban houses based on a strong space of containment and, especially, a lot of privacy.

This is how we undertake a reinterpretation of the relations between front and back, public and private, and also the concept of street by mainly trying to recover the space of a house in relation to a patio.

The vast and complex programme allows the construction, arranged as an “L” according to the best orientations, to reach the boundaries of the plot and, through a free-standing wall, the street is blocked, giving character, privacy and a clear and intentioned urban facade.

This patio, waiting for the second construction, will be another open-air space, firmly designed. The private rooms are located in the upper level, protected from lines of sight by a blind parapet balcony. The recreation areas (rehearsal studio and wine cellar) were located in the basement, for acoustic and climate reasons, and the public spaces were located at the ground level.

Interstitial spaces caused by setbacks are used to place an organic vegetable garden and an area for the 6 dogs of the owner to live in. The use of concrete was a wish set out by the contracting party, that is why, and through the exploration of its structural capacities, its formal expression was searched for.

The house secondly planned proposes a similar programme, but some requests of the contracting parties (firstly, to differentiate it from the first one) and the proportions of the plot, determine the project.

The plot area has a smaller front than the previous one, and it imposes a more compact construction that arises from interpreting that the empty space caused by the patio of the first construction is a consequence of the subtraction of a mass that will be set in the adjoining plot.

Through shifts of a structural sequence that search for small internal patios, this apparently compact mass is supplied with light and we find a formal expression of the character directly related to the adjacent construction but different from it in terms of form and way of living.

This is how these two apparently similar constructions rehearse the following opposite pairs: open/close – vast/compact – tall/short – full/empty – brim/sunken – front/back – group/individual.

The material is the same but its relation with the exterior, where the patios are smaller and more controlled, is not. This independent piece frees the back of the plot where the swimming-pool will be located.