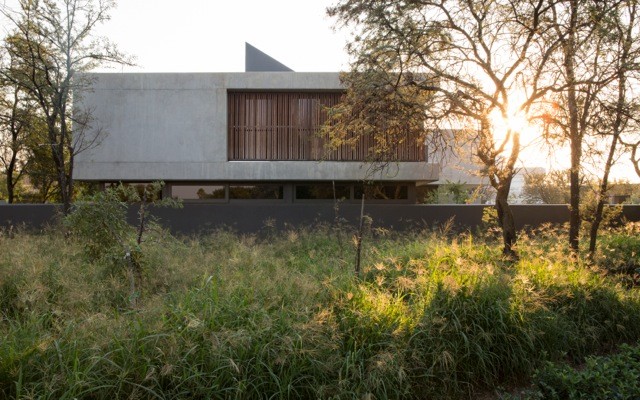 Text description provided by the architects. The house designed for the Jonker family is located in a golf estate, east of Pretoria, South Africa. Built on one of the last open stands in an established part of the estate, it is next to a green belt surrounding the golf coarse, but is separated from it by a street. The odd-shaped site had a grove of existing soetdoring (accacia karroo) trees close to the street. This natural feature was retained and dictated the siting of the buildings; it was utilized to create a privacy barrier between house and street also but also to draw the natural landscape opposite the street into the site.

The owners wanted a minimalist home that would provide separate functional areas for the family members’ activities. The program is split up into the distinct functional zones of the main house, the garage/service building and the outbuilding. The main house contains the family living spaces and bedrooms, while the outbuilding is a home office space on the ground floor and a guest bedroom space on the first floor.

The outbuilding with its independent functions is placed closest to the street, nestled in the grove of trees, leaving the largest and more private location on the site for the main house. The site is entered on the southern side and one is drawn past the linear graphic façade of the garage/service building to a planting of fever trees and the entrance courtyard of the main house.

From the outside, a concrete lintel walkway defines the entrance route with the swimming pool on the northern side utilized as visual focal point in the entrance procession. A cantilevering concrete slab from the garage/service building provides protection, reducing the scale and assisting in a comfortable transition between exterior and interior. The main house consists of three volumes and one enters the house into the first open and transparent volume of the living and entertainment spaces. Its open plan configuration allows effortless interaction while varying ceiling height defines the separate functions. The northern façade consisting of multi-panel sliding doors allows various degrees of physical interaction with the garden and outdoor living spaces.

The second, more solid volume is placed orthogonally to the west of the living spaces. It shields and defines the living space, southern entrance courtyard and northern outdoor living space. This more private zone houses the main bedroom and young daughter’s bedroom. Conceived as a withdrawn space, it is more intimately scaled.

The third volume on the first floor level is the two older boys’ retreat and contains their bedrooms and a large playroom / living area. It spatially connects with the ground floor through the double volume. The double volume also acts as light shaft filling the ground floor living spaces with natural light. The natural light and privacy is controlled on the northern and southern façades with slatted timber shutters.

The northern garden was designed as series of functional manicured spaces inserted into a natural landscape of indigenous grass and tree species.