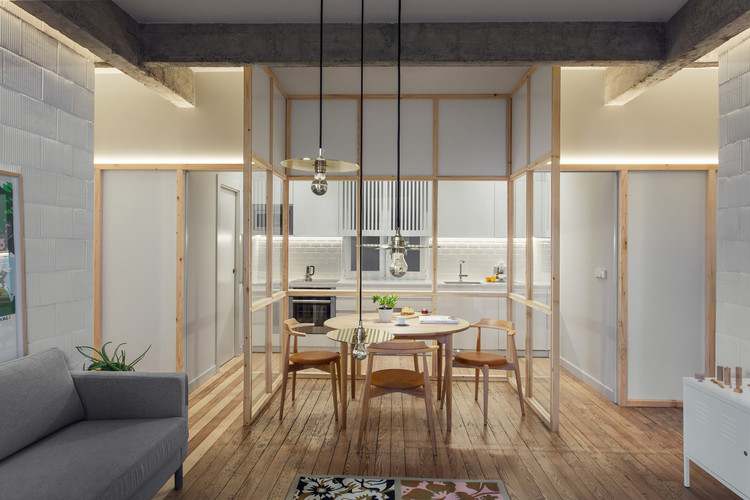 Text description provided by the architects. This apartment in Bilbao possessed two singular features that conditioned the planned approach right from the beginning. On one hand, a powerful reinforced concrete structure with edged girders; on the other hand, a polygon-shaped facade, furnished with sash windows that advanced over the front line.

With this refurbishment what was tried to achieve was to enhance and maximize these particular characteristics so they could stand out. For that purpose, it was decided firstly to uncover the concrete girders and beams giving them an exposed finish; and secondly, a distribution in which the existing long and dark corridor was removed and integrated in the main room was projected.

Moreover, the newly projected layout was inherited and conditioned by the disposition of the existing structure; thus, the decision was taken to place all the partition walls in track with the girders.  In order to emphasize and fully show the structure, walls do not conceal the beams, they do not even touch them, and in fact some centimetre distance is kept leaving a gap that in addition is used as illumination pit.

With the abovementioned conditions the apartment rooms were neatly allocated, those humid-rooms standing along the interior yard and keeping the front facade for the living room and bedrooms.

Moreover, the kitchen, dining room and living room lie in a central hub, shaping a sequence that stands from side to side, embracing the whole span of the house. In addition, these pieces are visually connected yet offering the chance to become independent thanks to a glass and wood partition together with two sliding doors concealed into the walls.

In terms of material use for the enclosures, two types of partition walls are differentiated: on one hand, towards the principal façade there are the heavy ones, made from blocks of thermo-clay without other coating than painting, showing the rugosity of their texture next to the concrete structure. On the other hand, towards the interior yard, the light ones were built using wooden studs and plasterboard, that provide rhythm and warmth emphasizing the difference with the enclosures at the other end.

Some pre-existing elements of the former house were reused, as it happened with the cast iron radiators and the floor. The last one was extended to the new area of the dressing room (formerly occupied by the kitchen and bathroom). The boundary between old and new pavement was solved creating a transition area where both meet and are interspersed generating a blurred impression.

The lighting of the apartment is integrated in the walls, reducing the width of the fake ceiling to accentuate the height of the house.  Light is focused downwards illuminating the thermo-clay walls and upwards on the wooden blocks. Lined up with them, illuminating the walls and emphasizing the difference of textures between the two types of partitions, the rugosity and imperfections on the one side against even and smoothness on the other. 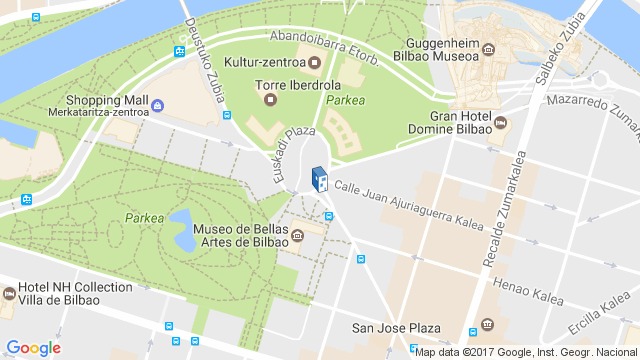 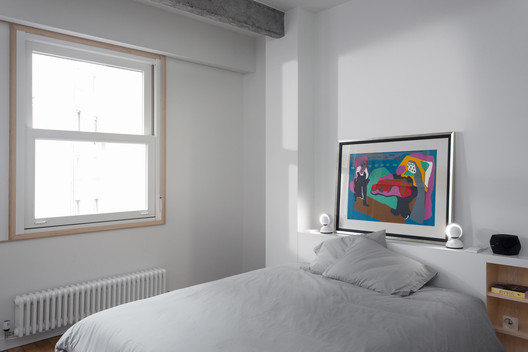