Save
Bamboo Showcases its Flexibility in Hyperbolic Pavillion
Share
Or
Copy

A team of architects from Florence, Italy have won CAMBOO’s bamboo design competition showcasing the material for its strong and sustainable construction qualities. Held in Phnom Penh, Cambodia, the CAMBOO festival sought to find an innovative design for a landmark pavilion as a centerpiece during the event. Architects Roberto Bologna, Fernando Barth, Chiara Moretti and Denny Pagliai beat out 125 entries with their winning “Hyperbamboo” pavilion, which was chosen for its “intelligent and well thought out use of bamboo as a construction material.” 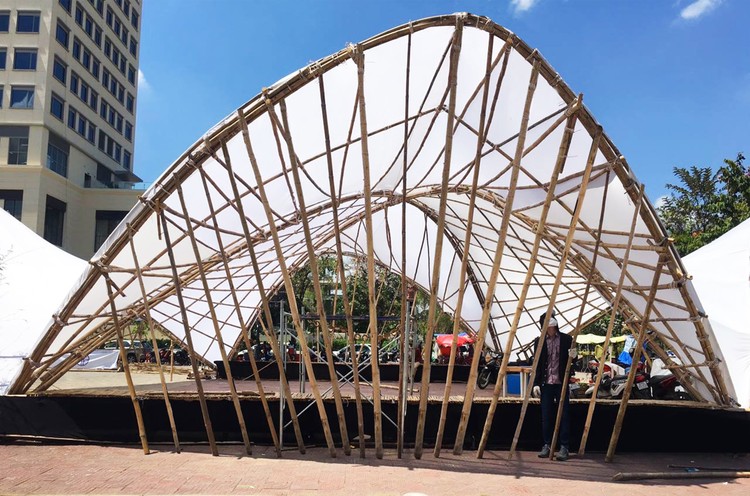 We are very proud to contribute to the mission of Building Trust international and strengthen the role of design: people need architecture but architecture needs people as well – Winners statement.

Hyperbamboo is built entirely from locally sourced Cambodian bamboo and shading fabric. Built in Freedom Park in Phnom Penh, the pavilion entrances fall along the longitudinal axis of the park’s square, where people move through the most during the festival.

The pavillions’ sail-like planes (two long and two short) are modelled after hyperbolic parabolas, which complement the flexibility and tensile character of bamboo. The two long sides increase the shade offered by the structure, while the two shorter sides include inclined walls that shield the view towards adjacent stores. The shape created by the roof can efficiently protect the pavilion from rain, with water rolling off its sides.

A primary structural frame of thick bamboo beams is used to set up the outer plane edges of the roof with a secondary frame forming the grid onto which the shading fabric is attached. Hyperbamboo is built with several external partitions - it can be completely open or closed on all four sides, or closed alternately on two opposite sides to create cross-ventilation and allow for natural light. At night, the use of artificial light gives the pavilion a glow through the semi-opaque roof sails.

The jury included representatives of Building Trust International, local skilled bamboo workers and architecture and landscape design professionals. The judges were reportedly “impressed with level of clear understanding and thought paid to the building stages of the design.”

CAMBOO was a huge success, the winning project had an incredible level of thought and detail into the overall construction and buildability of the design. The Hyperbamboo design played a key role in the success of the CAMBOO Festival and was a focal and integral point of the event creating a central hub and base - David Cole, founding partner of Building Trust International.

Bamboo often gets a bad rep as a “poor” material, but the stigma is lifting as its resurgence is supported by contemporary projects. In developing countries where the demand for steel-reinforced concrete is high, bamboo is being considered as a possible replacement, marking a new direction for the sustainable material. Its tensile strength and curve-friendly potential have been adopted into supporting skyscrapers in Hong Kong to beautifully crafted bamboo homes - a new departure from its vernacular roots.