Text description provided by the architects. A private residence frames a spectacular natural context, on the hills surrounding the Galilee Sea. Folded in a plastered white envelope, the inner spaces are oriented towards the view and invite it to enter the family's domain.

Reflecting upon the surroundings, a wide usage of roughly finished natural materials has been made. The exposed concrete ceilings emphasize the inclined section and call for the spectator to walk outside, onto the wooden deck. Steel structure articulate a rhythmic façade and compliment the pallette.  The owner, a practicing carpenter and locksmith, lovingly made many of the construction and furnishing details himself, such as: the central blue library, the wooden decks and pergola, the TV mezzanine and armchair. The bottom floor is a studio for the owner.

The access path is leading from the street, exposing parts of the natural scene at a time, before the complete picture reveals itself – slopping down from the common space in the heart of the dwelling.

Common and private spaces are parted by the blue library and a fireplace. Both of which are disconnected from the ceiling – making the room appear bigger and more spacious.

The connection between the central space and the eastern areas of the house and garden, are arranged so that to frame an ancient monolithic Dolmen structure. The Dolmen is a burial site, dated back to the Chalcolithic (Copper) Age, which was discovered on site. It was carefully preserved during the construction and plays a meaningful role in the orientation of the spaces.

The steep hill makes room for a spacious front yard, accessed fluently from the bedrooms. 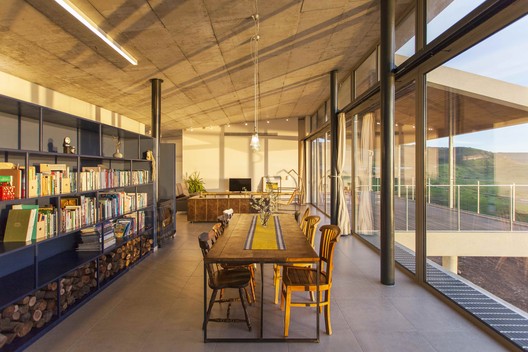