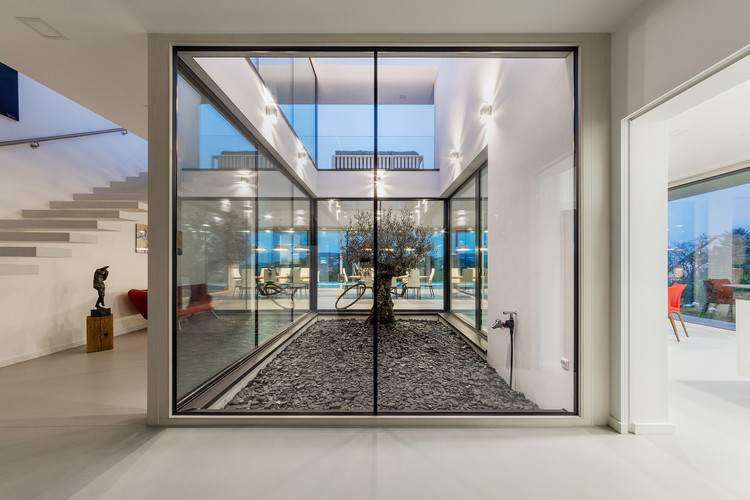 Text description provided by the architects. Until the early 20th century, the slopes of the Buda side of the capital (Budapest), that is, the hillside of the area called Óbuda used to be lined by vine rows. From the second half of the century on, viticulture started to wane and the vine rows were replaced by small plots and weekend properties proliferating there and, from the 1990s on, a growing number of detached houses were built there. The only reminder of the former vineyards is the typical “belt-shaped” plots: the narrow, long plots have often been divided into two, an upper part next to the street delimiting the plot and a lower one back in the plot.

This two-storey (ground floor and first floor) detached house was built on one of this lower plots of 2299 m2, connected to the street by a panhandle-like plot extension (a sidewalk). The starting point of its design was the slope of the plot. Therefore, walking down from the street along the sidewalk to the entrance of the house, one sees a one-storey building, but given the elevation of the terrain, the house gradually becomes a two-storey one.

As you go round the building, the two-storey form gradually appears. As the form is being disclosed, the house opens up to the garden: opposite to the one-storey, more closed entrance part, on the side of the garden, the house is looking at the garden, the landscape through a basically homogeneous, transparent glazed facade with glass sliding doors. The external appearance of the house is elegant, restrained; it was made with a monolith reinforced concrete slab system with transversal and longitudinal support elements, and load-bearing walls made of building blocks.

Elegance, the restrained use of materials is typical also in the interior spaces. The latter are furnished with only the most necessary pieces of furniture, so the interiors are spacious and airy. The community spaces on the ground floor and the private ones on the first floor are interlinked by several interior design solutions: except for the parquet floor coverings in the sleeping rooms and the wardrobes, the same jointless decorative stone cladding is applied everywhere, and the masonry parts are uniformly white; the flight of stairs, a steel structure leading to the first floor, made of monolith reinforced concrete, has a cantilevered design that makes it almost float, dissolve in space.

The total ground floor area can be seen already from the entrance, since the various functional units (kitchen, dining room, living room, office, staircase) are delimited by glass walls and sliding glass doors. Moreover, the house features an architectural and at the same time interior design feat: at the meeting point of the various functional units, there is a special glass cube on the first floor, opening up towards the roof area, with a magnificent 100-150-year-old olive tree inside.