The V&A Museum of Design Dundee has released new drone footage as the Kengo Kuma-designed project races toward its 2018 opening. At this stage, huge cast stone panels, weighing between 1.5 and 2.5 tonnes each, are being fixed in place on the curving exterior walls. Once complete, a total of 2,466 panels will wrap around the museum’s facade, the design of which has been inspired by the natural seaside terrain of Scotland’s northeastern coast.

In the drone footage, an engineer can be seen inspecting panels on the highest point of the building – nearly 60 feet (18.4 meters) above the surface of the River Tay. The building’s construction has been facilitated by the use of a temporary cofferdam consisting of 12,500 tonnes of stone, allowing the museum to safely be built out over the river’s surface. Removal of the cofferdam will be begin later this year.

Because none of the exterior walls of the building are straight, each panel was designed in advance in a 3D model, then meticulously cast in moulds using a formula of stone aggregate, cement and reinforcement mesh. Each panel is paired with a corresponding bracket in the channels of the wall, all of which were carefully mapped out prior to construction beginning.

When finished, the V&A Dundee will represent both Scotland’s first design museum and Kengo Kuma’s first completed building in the United Kingdom.

Construction on Kengo Kuma's V&A Museum Dundee is well underway, with the structure's inclined concrete walls already beginning to take shape. This new video produced by the V&A Museum shows the latest progress of the building, with commentary from several figures working on the project, including Kuma himself.

In November 2010, we announced that Kengo Kuma & Associates was selected over a competitive A-list of international architects to design Scotland 's landmark building, the V&A at Dundee. Well now, the £45 million, waterfront project is moving forward as it has just been approved by the city council! 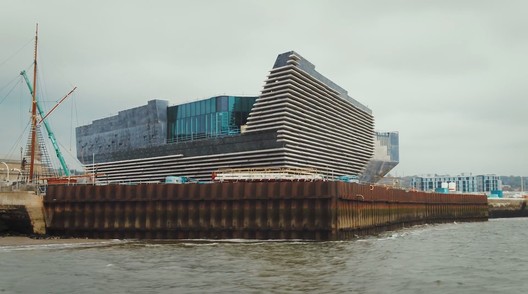