Save
In Residence: Inside John Lautner's Quintessential California Modern, the Lautner Harpel House
Share
Or
Copy

There are so many moves that the architect makes that you don’t understand the moment you see the house… and as those things reveal themselves, it’s always these really beautiful moments because it’s sort of like a poem or a song coming together in a way where it makes sense – you’ve heard it before but you didn’t understand it

In the latest video from their In Residence series, NOWNESS takes a look inside the recently restored Lautner Harpel House, built in 1956 by Los Angeles architect and Frank Lloyd Wright protege John Lautner. After purchasing the house in 2006, design restorer and Resurrection Vintage co-founder Mark Haddawy sought to restore the house to its original conception – a process that required the removal of several ill-conceived additions, including a second story.

Check out the video to see inside the house, and how its individual moments come together to create a signature example of California Modernism.

You have to admit it, bachelor-pads of various flamboyant psycho-paths, pornographers or drug-smugglers. Curbed Hollywood really seems to have a thing for John Lautner; his designs are continuously cropping up in tv-shows, films, cartoons, music videos and even video games.

John Lautner's Goldstein House Gifted to LACMA by its Owner

The Los Angeles County Museum of Art ( LACMA) has announced that John Lautner's famous LA residence, the James Goldstein House - often referred to as the Sheats Goldstein Residence - has been promised to the museum by its current owner James Goldstein.

I want you to let me do all the ideas I still have in my head. In the latest installment of the In Residence series, NOWNESS visits the last house designed by legendary Mexican architect Luis Barragán, Casa Gilardi. 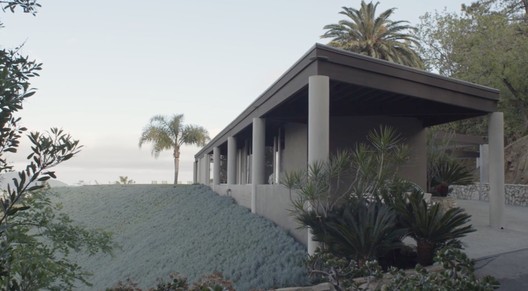