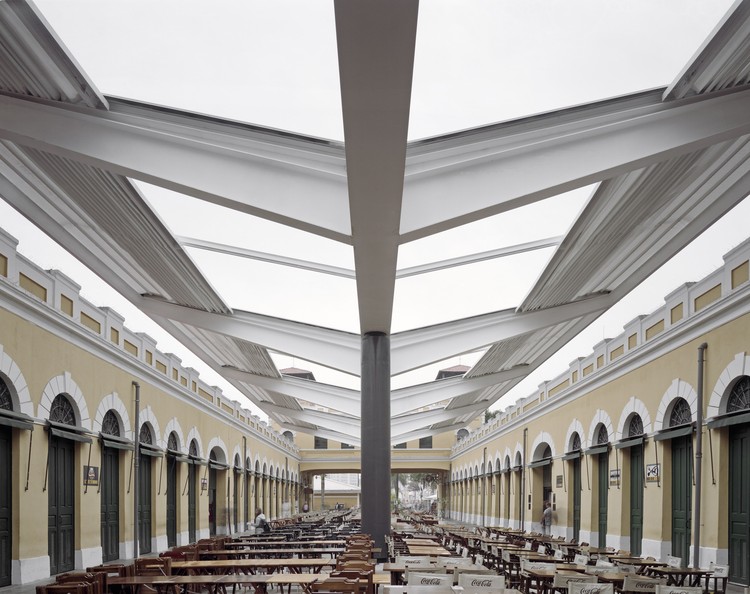 Text description provided by the architects. There is, in the context where the project operates, a multiplicity of concurrent times, conducted in the last 160 years by the influx of users to Florianopolis Public Market, whose history includes demolitions, changes of location, several renovations, and the active participation of generations of consumers, sales people and different administrations. The new roof for the central span, then, appears as another element in this narrative, and as such should respect and add to the existing, without becoming irrelevant or being characterized as mere closure. A new scale is created, protected from the elements, in order to adequately support new additional stories: temporary exhibitions, cultural performances, festivals, screenings, parades, etc.

Bearing in mind, that the architectural design consists essentially of a surface that rests above the existing context almost without touching it, the premise of lightness understood as precision and determination (CALVINO, I.), is critical. Lightness, thus perceived, is not linked merely to an absence of weight of the constructive system, but rather to a certain tension between the force of gravity and the suspended “V” shaped steel parts that hover steadily, slightly above the level of the existing roofs in order to create a void through where the air can freely circulate. To perform this composition, a system was sought that allows for the implementation of large spans with a minimum of components and whose arrangement is the result of a simple thought: the location of the two support points, 36 meters distant from each other, should take place over the central axis aligned with the existing pillars, so as to maintain the configuration of the previous space, and to prevent the new foundations from generating harmful interference to the basement of the historic building. Over the aforementioned pillars lays a main beam in rectangular profile to which intermediate “ribs” are connected, distanced from each other in spans of 11,4m and sloping towards the central gutter.

The uppermost layer consists of a lightweight and high strength membrane that could be retracted through an automated system in which beams slide within rails through the traction of motorized chains, which cause the fabric to roll wrapping over the roller positioned at the extremities. Such system should allow for the full retraction of the upper protective layer providing an unobstructed view of the sky and the existing building.

Thus, a proposal is conformed in a way that seeks to deal respectfully with the multiplicity of the history of Florianopolis Public Market, remarking, that such action carried through accurately, can enhance the space as a democratic place for meeting and public coexistence. 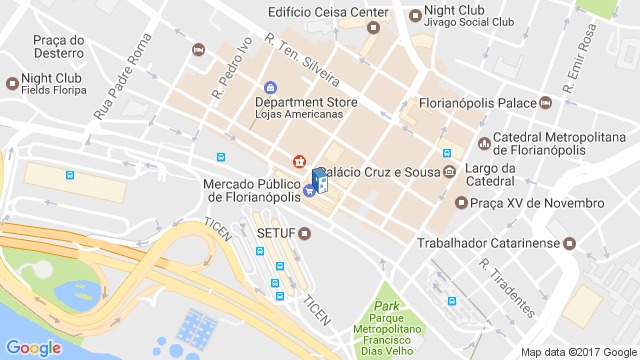 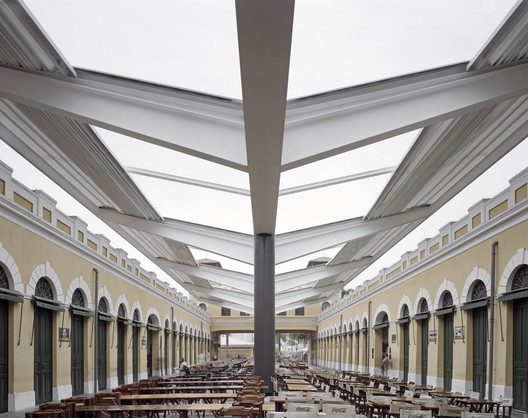