The latest Google Doodle, on display today on Google's homepage in many countries around the world, honors the late Zaha Hadid on the 13th anniversary of her acceptance of the Pritzker Prize. The highest honor in the architectural profession, Hadid became the first woman to be selected as a winner in 2004.

The doodle portrays the architect in front of one of her most acclaimed buildings, the Heydar Aliyev Center in Baku, Azerbaijan. Earlier concepts for the doodle are shown to have featured Hadid's designs for the Glasgow Riverside Museum and Galaxy Soho in Beijing.

Born in Iraq in 1950, Hadid learned about abstract art and architecture at the Architectural Association in London. There, she found inspiration in unconventional forms. Before computers made her designs easier to put on paper, Hadid's studio was known to use the photocopier in creative ways to bend lines and create new shapes. The type in today's Doodle finds inspiration in Hadid's energetic sketches, which explored both form and function.

Hadid broke new ground on modern architecture using the surrounding landscape for building inspiration. The straight lines and sharp angles of the Vitra Fire Station in Germany were inspired by nearby vineyards and farmland, while the roof of the London Aquatic Centre forms the shape of a wave. You can see the London Aquatic Centre and some of Hadid's other impressive work in Google Earth's interactive exhibit.

The Heydar Aliyev Center, pictured in today's doodle, sets itself in contrast to the block-like structures that surround it in Baku, Azerbaijan. At the same time, this cultural center takes inspiration from historic Islamic designs found in calligraphy and geometric patterns to create something entirely new. The building takes an open form to invite the public into its space. The center has played host to modern art by Andy Warhol and Tony Cragg, and world-class performances from Kitaro and Alessandro Safina.

In her early work, Hadid visualized her projects through paintings that resembled abstract modernist art. She famously said, "There are 360 degrees, so why stick to one?" You can explore some of these early concepts - including via virtual reality - on the Google Cultural Institute.

Today we celebrate Dame Zaha Hadid's contributions over her lifetime to the world of architecture. Thank you, Dame Zaha Hadid, for all you've done to bring people together in the service of art and culture!

27 of the Best Google Doodles Celebrating Architects and Architecture

Since 1998, Google has been manipulating their iconic logo to celebrate holidays, anniversaries and the lives of famous artists, pioneers and scientists, creating what they call Google Doodles. Since the very first doodle (used to indicate founders Larry Page and Sergey Brin's attendance at Burning Man that year), Google has produced over 2000 fun, colorful drawings to inform their users about the important milestones that fell on that date.

In her lifetime, Pritzker prize-winning architect, fashion designer and artist Zaha Hadid (31 October 1950 - 31 March 2016) became one of the most recognizable faces of our field. Revered and denounced with equal aplomb for the sensuous curved forms for which she was known, Hadid rose to prominence not solely through parametricism but by designing spaces to occupy geometries in new ways. 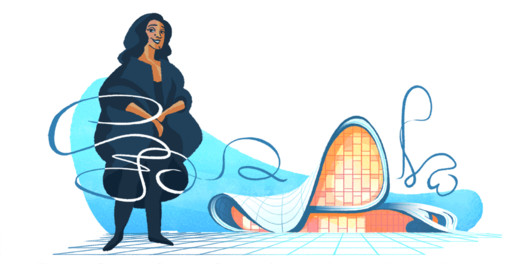