Schmidt Hammer Lassen Architects, in collaboration with Holscher Nordberg Architects, has been selected to lead a 120,000-square-foot (36,000-square-meter) redevelopment of the new Carlsberg City district in Copenhagen. Located on the former site of the famous Carlsberg Brewery, the project will incorporate the area’s historic industrial elements in creating a new sustainable city district with inviting open spaces, public transportation, and a series of context-sensitive new buildings, including a 262-foot-tall (80-meter-tall) residential tower.

Partnering with engineering firms COWI and Züblin and landscape architects Werk, the team is focusing on creating a “vivid and diverse neighbourhood for living, working, learning and socialising.” In total, the development will consist of 17,000 square meters of housing, 7,000 square meters of office space, 2,000 square meters of retail spaces, cafés and restaurants and 10,000 square meters of basement space. The largest new construction will be the residential tower, located near the iconic Elephant gates in the North Western corner of the Carlsberg site.

"There are many parametres coming into play at this unique site in Copenhagen. The new building is part of the special historical context of Carlsberg, with its close proximity to the Elephant gates, where it will form a link between the two main public squares, Ottilia Jacobsen Square and Bryggernes Square,” says Senior Partner Kristian Ahlmark.

“The location, with historic neighbours and a sloping terrain, creates an exciting and technical challenge. At the same time, the tower will rise above Carlsberg City and become part of Copenhagen's new skyline, thus becoming a reference point that both historically and physically will help tie the city together."

A new commuter railway station (expected to be one of the Copenhagen’s busiest) and a vast system of bicycle paths will connect the district to the surrounding city and the new UCC Carlsberg Campus, where an inaugural class of 10,000 students has recently begun their first semester. More than 3000 new homes will provide accommodation for the area’s growing population.

The project is expected to be completed in 2024.

André Chiote's newest series of illustrations focuses on the seminal architectural works of Danish firm Schmidt Hammer Lassen Architects, in celebration of the 30th anniversary of the firm's founding this year. Established in Aarhus, Denmark, in 1986 by architects Morten Schmidt, Bjarne Hammer and John F. 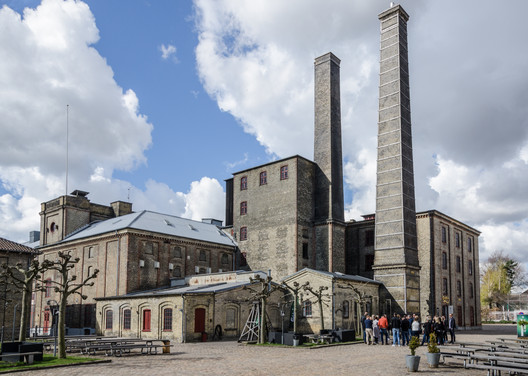