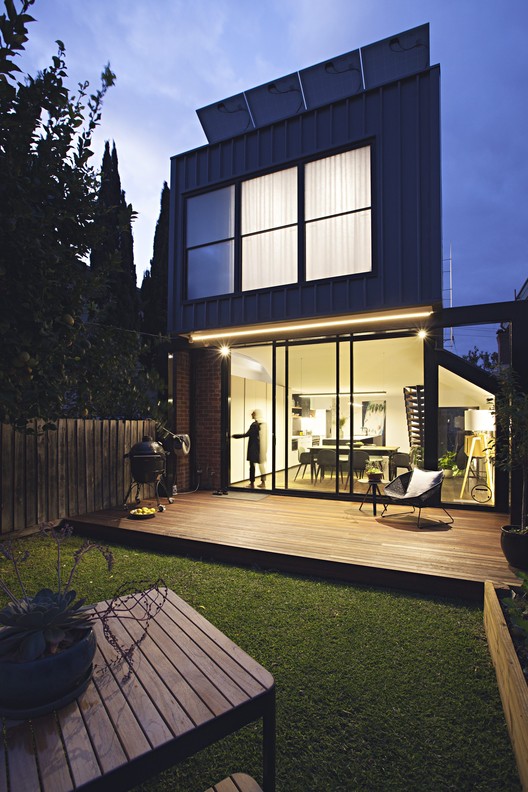 Text description provided by the architects. Perched - like a sparrow. Perched House is a light extension at the rear of an inner city semi-detached Edwardian house that sweeps over your head.

The brief and site are common in inner-city Melbourne properties. Usually, because of the need to pack in as much space and storage as possible, the spaces are susceptible to becoming dark and feeling cramped. We decided to stick to the essentials and neatening up the layout to reduce dead space while playing with natural light to increase the drama and the effect - the space is in fact quite small, but no one would think so.

Natural light is drawn in from various areas of the house to extend the rooms into every direction. We introduced diffused skylights in the ensuite and walk in robe, a recessed glass roof above the kitchen work space, a highlight window above and on either side of the bureau nook in the dining and a glass wall between the staircase and the side garden running parallel to it. This allows one to experience the changes in light throughout the day and gives the house a sense of calm and openness.

Our client’s brief was to renovate the existing rear extension which was structurally sound and to add a bedroom - she had no idea we would reconfigure the entire house in the process. The kitchen was a very important component of the design as her partner is a chef - this had to take pride of place since entertaining and social gatherings around the island bench is a way of life for them. We gave them 2 more bedrooms upstairs, with a bathroom and balcony as well as a full master suite in the existing front part of the house.

In the new part of the house, we wanted a single stair run without a landing and the client wanted a high ceiling to match the existing house. The compromise was to break up the extension into two - the kitchen has a 2.4m ceiling, which solved the stair dilemma because we concealed the landing. Upstairs, we have a bedroom directly off the landing, then continue up a few more steps to reach the bathroom and rear perched bedroom. Sweeping the ceiling up with a curve just made sense after that. The changes in ceiling heights throughout the house give a different dynamic to each space; the lower ceiling above the island bench creates an intimate and focused environment in the kitchen while the higher ceiling above the dining allows more openness to the back yard with 3.0m glazed sliders, giving an uplifting feeling.