Text description provided by the architects. The Blairgowrie Beach House on the Mornington Peninsula retained and altered the rear proportion of the existing building and expanded the dwelling forward on a steeply sloped site to accommodate additional living and sleeping areas.

Manipulations of the building form were employed to address the access disconnect and setup a conceptual framework where we continued our practices interest in spatial division patterns.

The new first floor incorporates a large cantilevered metal clad form which created a covered area for car parking, and was counteracted with concrete rendered vertical walls which pushed out to level out the land. Continuing formal manipulations, the metal clad form had volumes carved out to incorporate a balcony space, and a feature vertical window to illuminate at night and interact with the public realm when the house is being occupied. 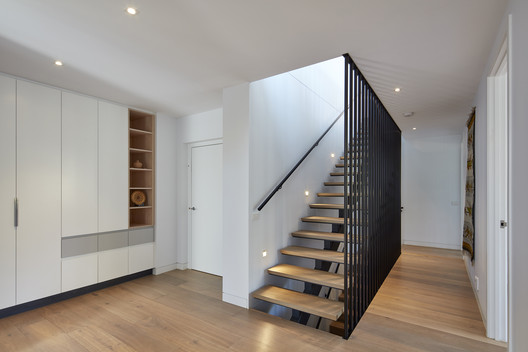